White is the new black, defeat the final rejection 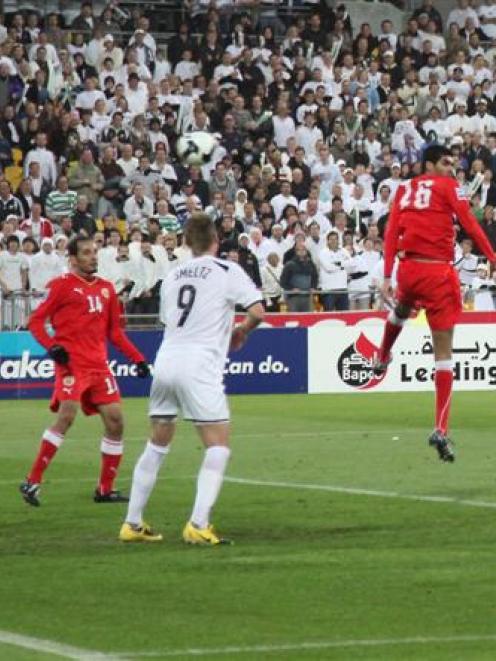 All White Rory Fallon heads the ball into the Bahrain goal, shattering the visitors' dreams. Photo by Craig Baxter.
Last Friday afternoon as members of the Bahrain entourage, conspicuous in their red shirts, wandered around the lobby and mezzanine of the Intercontinental Hotel in Wellington, inside one of the conference rooms Matthew Weiner, creator, producer and lead writer on the award-winning TV series Mad Men, was laying out pearls of wisdom for New Zealand writers.

If the script editors for the visiting football team's campaign - due to make their ultimate pitch in the white-hot atmosphere of the Cake Tin the following night - had been eavesdropping, they might have picked up a valuable tip or two: Don't take rejection personally; never play to the market - er - crowd; and, before you set out on the journey, visualise the finished project, write a glowing review of it, then fold it up and seal it in an envelope - to be opened only in future turbulent and creatively barren times.

For however well both teams played, there was only ever going to be one winner on the night. To be fair, it could have gone either way. It is a matter of national rejoicing that it went to the All Whites - thanks to Rory "the Assassin" Fallon's deadly header in the 45th minute, and Mark Paston's miraculous penalty save early in the second half - but a thought should be spared for the vanquished.

The Bahrainis were brave opponents in an excellent contest, but in the end, at the final whistle, they slunk away into the Wellington night, anonymous, their dreams shattered, their ambitions aground on the rock of unambiguous, final rejection we call defeat.

Far too late to acquire a ticket, I caught most of the match that night, wandering home from dinner in Cuba St, in the Bristol Hotel. It had been transformed for the occasion into a makeshift cinema, full of rowdy responsive fans, who erupted with utter joy at Fallon's Glasgow kiss into the back of the net, then all but lifted the roof off when the inspired Paston fell to his right and saved the shot that would, in all likelihood, have put the boot on the other foot, and a depression-era downer on the irrepressible city.

But save it he did and the rest, as they say, is history. All along Courtenay Pl the punters, the fans in white jumpsuits, the mop-headed and mustachioed 1982 club, the mini-skirted young women, and Uncle Tom Cobley and all came to witness it and to celebrate.

By 11.30pm, it was standing room only in the dozens of stylish establishments lining that quarter - the Establishment, Red Square, public, Ponderosa, Kitty O'Shea's, the Malthouse. The entire block exuded that distinctive waft of alcohol, body odour and sexual possibility which winning seems to exaggerate.

To the victors the spoils - whatever they might be.

Around midnight, when sobriety and a quickening breeze decreed it was too chilly to be taking notes on street corners, I wandered home.

The route took me past the plush Intercontinental where an unexpected invitation had seen me in the Mad Men audience the previous day and where the persistent inner reporter decreed I should take another shifty - and a nightcap.

The lobby bar was quiet, not a red shirt to be seen. A replay of the match was in progress. I sat down with my old friend Mr J, and noticed the group of Middle Eastern gentlemen - besuited, sober, sombre - and who could not even bring themselves to glance in the direction of the screen, to wonder anew how it had all come to nought.

They'd no doubt had a night of it. When you're from the Middle East, New Zealand is a long way to come, and even longer way to travel back empty-handed.

So close and yet so very, very far.

The hotel is in Grey St, an attractive enough little byway off Lambton Quay. The popular cafe opposite is called Arabica. But, for the visitors, in defeat even this probably seemed like mockery.

On Sunday, the hotel frontage was deserted and, as if to blow the cobwebs off a capital-sized hangover, a roaring southerly howled up across the straits.

Dust, and paper and all the other detritus of victory swirled in eddies and spasmodic, short-lived mini-twisters, churning Grey St into what, for the departing Bahrainis, must have now seemed like desolation row.