Who's sorry now, and who really is not? 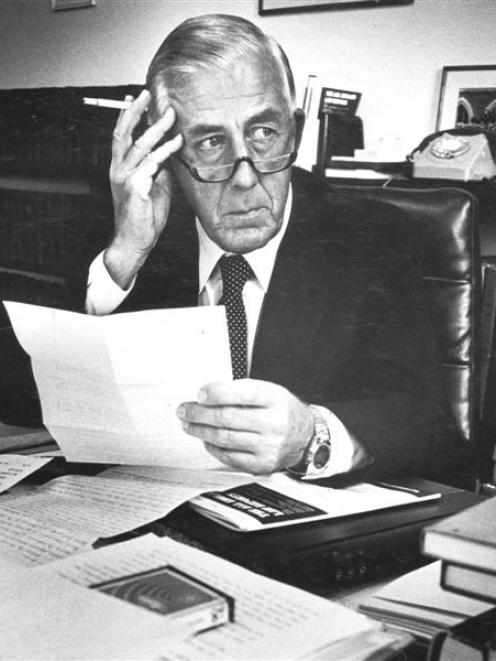 Just wanted to get that off my chest.

Only problem is, I'm not really.

It's part of the job description: expressing an opinion - and if it were so bland as to induce a mass outbreak of the warm fuzzies, there'd hardly be much point, would there? Guilt, regret - they're a bit like wind.

In the public arena, bottled-up, they cause political and social indigestion.

And when the pressure builds to a certain point, it becomes expedient to let it go.

Eventually, guilt and its various doppelgangers need to be expiated.

That's what Rodney Hide has been doing of late.

First it was an apology to the general public and his Remuera electorate; then a week or two later more of the same to his party.

Remorse is an admirable quality in some, but why can't I quite believe that Mr Hide has a sorry bone in his body?

He spent all those years - no, an entire career - preaching from the holier-than-thou pulpit of fiscal rectitude then, under the spell, the excitement, the "I'm enjoying this new relationship and, dammit I'm going to make the most of what I'm entitled to" logic, he discovered he was human after all.

But, big oopsie, that doesn't quite fit with the brand.

One suspects he was sorry because he needed to be - because he was caught red-handed and with the sticky evidence of the perk-jar all over his chops.

But enough of Mr Hide.

He is just one in an endless procession of politicians and public figures who have found it convenient to cosy up to the S-word.

There have been more public apologies in the last week.

Strangely - see, I'm not an unmitigated cynic - I do believe these, belated though they have been, are genuine enough.

First we had Rob Fife, the head of Air New Zealand, apologising for his airline having inadequately addressed the concerns and feelings of the Erebus victims' families in the intervening years.

Then we had Deputy Prime Minister Bill English apologising for the attitude and behaviour of the National government of 30 years ago.

As far as I am aware no-one has yet apologised to the family of Justice Peter Mahon, whose Royal Commission of Inquiry report was savaged by the establishment of the day.

And it was revealing to learn from the rerun of the television docudrama, Erebus: The Aftermath, which played over the weekend, that of the two leading voices in the Court of Appeal decision that found that Justice Mahon had overstepped the mark in accusing the airline of a cover-up, the daughter of one worked in public relations for the airline and a son of the other was employed by it as a pilot.

No scope for conflict of interest there, then.

Abandoned by his peers in the higher court, Justice Mahon felt compelled to resign.

The Privy Council, too, while expressing its admiration for his "brilliant and painstaking investigative work", said there was no evidence of a conspiracy, no basis for the judge's famous "orchestrated litany of lies".

Justice Mahon may have been injudicious in his choice of words - that will forever be a matter of opinion - but he is now broadly accepted as having shifted the onus of blame and balance of probability for causing the tragedy from the original pilot error to organisational failure.

It cost him his illustrious career.

Some say it also shortened his life, although his son, the artist, writer and activist Sam Mahon is not so sure.

He told The New Zealand Herald recently that his father already had a weak heart and that he relished conflict, and adversarial competition.

"For any of us to be able to stand up, and say 'these people should be held to account' is great. Because in this country . . . nobody ever takes account for their actions."

Although they did their best to make Justice Mahon pay for his, talking truth to power is something for which you should never have to say you are sorry.