Freedom campers in Central Otago in January. Photo: Pam Jones
Tension between freedom campers and residents peaked again this summer throughout Otago, following a season in which pressure was put on freedom camping spots by  large numbers of tourists, and no doubt even some residents in centres like Queenstown where accommodation is hard to find, writes Maree Baker-Galloway.

Many councils are struggling to manage the impact of this increase on infrastructure, services, environment and community amenity. Regulation, enforcement and financing of freedom camping is largely the responsibility of district councils, and the Department of Conservation for conservation land. Freedom camping and activities associated with it are regulated through a combination of national legislation (Freedom Camping Act 2011 and Litter Act 1979) and associated bylaws that vary from district to district.

Freedom camping is defined as overnight camping (in tent, temporary structure, caravan, car, house truck etc) within 200m of a motor vehicle accessible area or the mean low-water springs line of the sea.  It does not include resting to avoid driver fatigue. 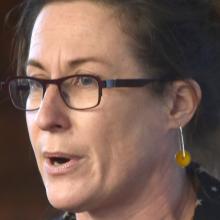 Maree Baker-Galloway
At a national level, the Freedom Camping Act presumes that camping is permitted unless it has otherwise been prohibited or restricted at specific sites in a local council bylaw.

At the first instance, in terms of spatial controls, the onus is on the district and city councils to say where freedom campers cannot go.

Examples of this in the Otago region include prohibitions on freedom camping at Taiaroa Head, Portobello, many urban areas, foreshore between Kaka Point and the Nuggets, much of the coast between Oamaru and Kakanui, Kinloch, Shotover Delta and Lake Hayes.

However, under the Freedom Camping Act, a council may not simply impose a blanket  prohibition on  freedom camping. It has to be a site-specific response, and even at that level, a council’s discretion is not unfettered. There is quite an involved consultative process to go through before a bylaw can be put in place. Also, to prohibit freedom camping in a specific location, a council must be satisfied  the prohibition is necessary to protect the area, the health and safety of people who may visit the area, or access to the area. The council must also be satisfied the bylaw is the most appropriate way of addressing the perceived problem.

Freedom camping is also specifically permitted on conservation land, unless the director-general of conservation, through Doc, has gone through similar processes and tests as councils do, to restrict or prohibit camping in certain areas.

When the Thames Coromandel District Council passed and amended bylaws in 2011 the NZ Motor Caravan Association Incorporated took the council to the High Court in 2014 challenging the legality of the bylaws, asserting they did not follow the required processed or meet the  tests in the Freedom Camping Act. The NZMCA was ultimately successful on some specific clauses, but not in overturning the bylaws in their entirety.

The case and 46-page decision highlights the care councils have to take, and illustrates in part why there is not necessarily a quick, effective fix.

Where freedom camping is permitted, the Act gives council specific powers to impose fines for offences relating to damage of freedom camping areas, structures, flora and fauna, and the depositing of waste (including of the most personal kind).

On a district and region scale, there is not a simple solution readily to hand.

Plus, when cross-boundary effects and capabilities are considered, this framework does not accommodate well for co-ordination and consistency of approach, and disparity between districts and regions in terms of financial resources and ratepayer to visitor ratio. In response to pressure from the public and local government, Tourism Minister Kelvin Davis recently announced central government’s intention to establish a working group for the development of solutions to freedom camping issues. The group comprises of representatives from central and local government and  stakeholders in the tourism industry, with a focus on developing workable strategies for the 2018-19 summer season.

Ultimately, simply banning freedom camping at specific sites is not a long-term solution; the problem is simply being shifted from one place to another, prompting a cat-and-mouse chase and causing greater strain on a select few sites and a reduced quality of experience for those using the sites. The challenge is to regulate and service freedom camping in a co-ordinated manner throughout the region so  the potential economic benefits (from freedom campers) are not outweighed by negative effects on the environment and the rights of residents to enjoy safe, clean and accessible outdoor spaces.

Tension between residents and freedom campers arises where sites are left dirty and overcrowded, and where the washing, cooking and waste disposal practices of visitors clearly has a negative impact on the environment.

There is only so much enforcement and fines can keep up with and act as an incentive for good behaviour, without constant supervision. Central Government’s working group initiative offers promise that centralised regulation and funding may be available in the near future, with a potential overhaul of the Freedom Camping Act.

Hopefully, there will be an incentive for councils and Doc to act in a co-ordinated manner to better provide for freedom campers in areas which can handle them.

-Maree Baker-Galloway is the partner leading Anderson Lloyd’s resource management team. The opinions expressed in this article are those of the writer and do not purport to be specific legal or professional advice.