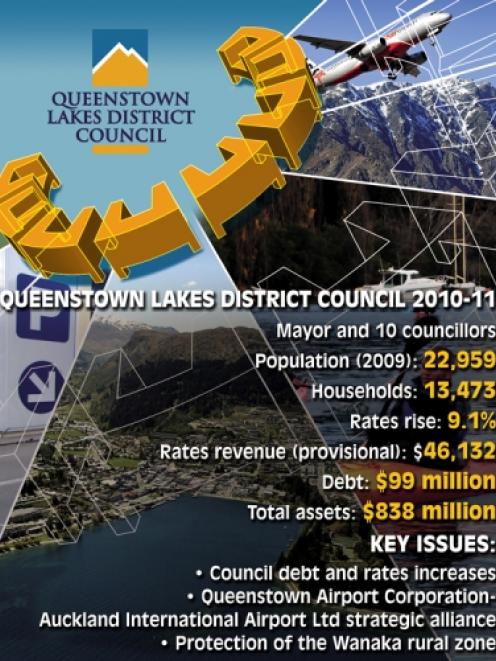 QLDC
The election for the Queenstown Lakes District Council is shaping up to be one of the most critical in recent history, with three candidates standing for mayor and 20 candidates vying for 10 seats on the council.

In Arrowtown, for the first time in nine years, a vote is needed.

Standing for the ward this year is current councillor Lex Perkins, who has until now been elected for the Wakatipu ward, and Simon Spark, the president of the Arrowtown Rugby Club.

With less than a month to go until people take to the voting booths, the issues seem to have already been well documented.

The council's long-term plan estimated that debt would reach $400 million by 2019.

A working party established a year ago to reduce the debt levels has cut $150 million from that total, but there is still another $150 million to go to bring debt back to an acceptable level.

On top of this, Lakes District ratepayers have faced consistent rates increases, the most recent a 9.1% increase for the 2010-11 financial year, 0.6% higher than forecast in the 10-Year Plan and just over 1% higher than the figure consulted on through the Draft Annual Plan.

The actual increase for individual properties depended on property use, valuation, the services it received and where it was located.

Another contentious issue for the elections - and the new council - will be that of the strategic alliance between the Queenstown Airport Corporation and Auckland International Airport Ltd.

On July 8, the $27.7 million alliance was announced, QAC having created a 24.99% new shareholding and selling it to AIAL.

Auckland Airport has until June 30, 2011, to increase its shareholding to between 30% and 35% - a process which will require council-led community consultation.

However, the matter is now before the High Court and the council has given an assurance it will take no further steps to increase Auckland's shareholding.

In the interim, the council and council candidates have been limited to what they can say on the issue and face problems of predetermination in the future should they be deemed to have had an opinion on the transaction.

Meanwhile in Wanaka, sporting infrastructure is proving to be a hot topic, with a sports stadium, swimming pool, artificial hockey turf and netball courts included on residents' wish-list.

The major issue is where to put them.

Linked to that is the future of the central recreation reserves of Pembroke Park and the A and P showgrounds/rugby fields.

There are also questions over the future of the central recreation reserve camping ground (Wanaka Lakeview Holiday Park), whether it should be upgraded and if so, to what extent, and should a small camping ground remain.

Another major issue in Wanaka is the protection of the rural zones in the face of continued development of rural areas, despite the Wanaka Structure Plan and the 2020 meetings held in 2002.

Queenstown Chamber of Commerce chairman Alastair Porter said the district was facing some of the biggest issues it had ever faced and with "at least a third" of the next council being newly elected, new voices on the council could be expected to have "a real impact".

Mr Porter said that from the chamber's perspective some of the issues in the district were a wide dissatisfaction over a perceived lack of consultation and transparency; the council's current and predicted debt levels; and council rates as a consequence of that debt.

"The QLDC does not have a clear vision that will provide the district with a sustainable future: In particular, cutting debt and rates.

"There is a lack of integrated decision-making and too many ad hoc decisions being made - such as the issue of new shares in Queenstown Airport [to Auckland Airport].

"The forthcoming elections provide a real opportunity for the community to elect a council who want to partner with the community to deliver a district that is both an affordable and stimulating place to live."