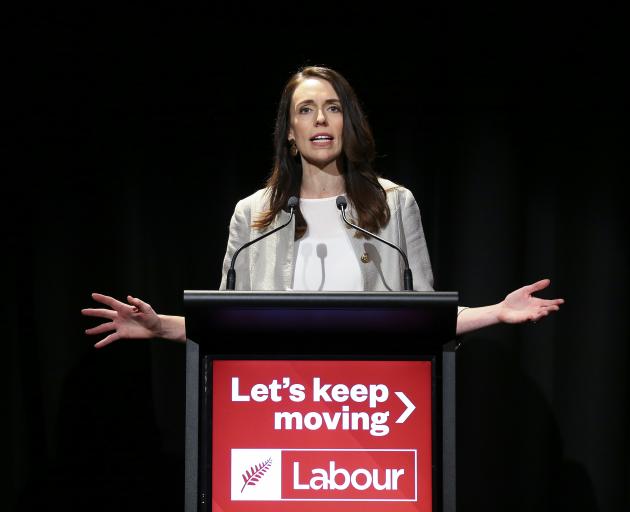 In a speech in Wellington, Ms Ardern also announced an extension to the small business loan scheme and funding for 23 "jobs for nature" projects, including two in Southland it is hoped will employ a combined 72 people.

"Our immediate response has been to support our people, and invest in them," Ms Ardern said.

"But as we move to recover and rebuild, we must also grow and create jobs, but not just any jobs, but the kind that supports the investment we are making in infrastructure, the environment, and our future."

In contrast to then leader Andrew Little’s social policy-focused pre-election conference speech in 2017, Ms Ardern outlined a five-point economic plan to party faithful, a programme which she said would have people and wellbeing at its centre.

"We are marshalling our resources to ensure there are not only jobs available but that they are in areas that address long-term challenges — the under-investment in infrastructure, housing and protecting our environment."

The jobs for nature projects, a programme announced in May’s Budget, was an example of the kind of initiatives the Government hoped to introduce, Ms Ardern said.

"They will help restore our environmental reputation to what we know it should be, a reputation that underpins so much of our tourism, our trade, our brand.

"These initiatives aren’t just double duty, they’re triple, and they’re helping pay down the environmental debt that would otherwise be paid by the next generation."

In her speech, Ms Ardern singled out $4.8million in funding to Environment Southland for wetlands projects.

The first was a $4.25million, 300,000ha biodiversity protection project expected to create 60 jobs, and the second was a $385,000 contribution to the sustainability of indigenous fish species.

Environment Southland chief executive Rob Phillips said the government funding was a considerable investment and would mean work which would have taken some time to achieve would be given greater priority.

“We’re committed to working with our iwi partners, farmers, community groups and other organisations to strengthen Southland’s environment, as well as our economy," he said.

"One does not thrive without the other, so this investment is critically important to helping our region recover from the impacts of Covid-19.”

Ms Ardern said 90,000 small businesses had applied for government-backed loans so far —a scheme she called an economic lifeline — and more than $1.5billion had been paid out.

That level of demand had convinced the Government to extend the scheme until December 31, she said.

"This means those businesses who are doing OK now, but who may experience cash flow difficulties further down the track, will still have access to it."

"We are progressing with all the checks and balances needed for a transtasman bubble, and also on reconnecting with our Pacific neighbours."

“Labour promised three years ago to “Let’s do this” and hasn’t done any of it," Mr Muller said.

“Today’s so-called economic plan will go in the same rubbish bin as its KiwiBuild plan, its light rail plan, its mental health plan and its child poverty plan."

Act leader David Seymour said cleaning up rivers was worthwhile, but a sideshow given the scale of economic damage wreaked by Covid-19.

"Meanwhile, government debt is set to reach its practical limit by 2024 and there is no plan to rein it in."

It must be election year. Another lollie scramble to be paid by you. All government 'jobs' are paid for by at least one of the following; taxes, borrowing, inflation or devaluation.

72 jobs in otago and southland, talk about an ambitious goal! I guess thats more than the number of kiwibuild houses that actually got built. Im still waiting for jacinda to honour her promise of ending poverty.