0 Comments
Motorists are being urged to take care on roads as snow settles in parts of the South today.


The snow closed State Highway 85 (Palmerston to Kyeburn) for a couple of hours from midday, but Waka Kotahi advised just before 2pm it had reopened. The transport agency reminded motorists that winter driving conditions remained in place.

There have been flurries in Dunedin's hill suburbs, but very little settling around the city.

MetService says a cold south to southeast flow is spreading north over the South Island today, bringing snow and ushering in low temperatures for the next few days.

Heavy snow warnings and watches were issued for Southland, Otago and Canterbury today, while some areas can also expect heavy rain and severe northwest gales.

The forecaster this morning said snow could affect several southern highways, including Dunedin's Northern Motorway and the alpine passes, throughout Sunday.

Around midday the Central Otago District Council said snow was settling in the Maniototo and Manuherikia areas and motorists were urged to take care. Crews were out ploughing and gritting. 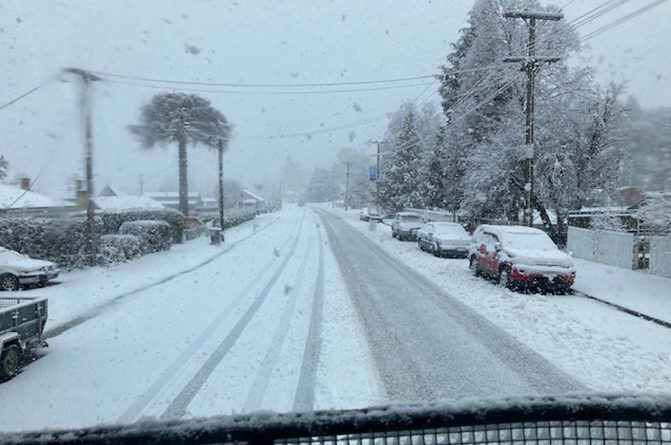 Snow has been falling in the Maniototo and Manuherikia areas this morning. Photo: CODC/Fulton Hogan

Snow was settling in several centres, including Ranfurly, Oturehua, Naseby, Lawrence, and further south around Waikoikoi.

There are heavy snow warnings for inland Canterbury, and heavy snow watches for Otago and Southland, where snow amounts could approach warning criteria above 200 metres.

MetService said the widespread snow was "likely to significantly affect travel through these areas".

Southeasterlies were likely to persist through to Wednesday, keeping temperatures low in the South.

MetService said temperatures were forecast to drop as low as -3degC and the highs were not expected to reach double digits until the end of the week.