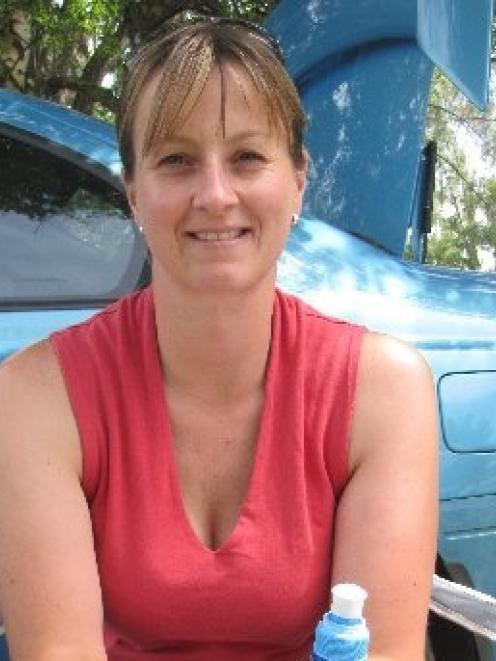 Gini Sinnamon, of Alexandra, picnics in the shade at the Omakau races. Photo by Sarah Marquet.
What were you doing at 12.30pm yesterday? Chances are you were like hundreds of others throughout the region, out and about enjoying a brilliant Otago summer's day. On the dot of 12.30pm, Otago Daily Times reporters spoke to a handful of people about what brought them to their particular location. Here are their stories.

At 12.30pm yesterday, Gini Sinnamon, of Alexandra, was enjoying the shade after a family picnic at the Omakau races.

Sitting among the cars and trees, away from the action, she admitted it was her husband, Nathan, who was more interested in the gallops than she was.

She said she preferred the trots which were on the day before but, as they were in Dunedin, they had been unable to make it.

She had been going to the races since she was a small child living in Ranfurly and loved race days.

Picnicking with her were her two children, Eve (2) and Jack (4).

They too were not particularly interested in the races but Mrs Sinnamon said they liked "certain aspects" such as the bouncy castle and the hot dogs.

When this reporter found the Sinnamon family, the children were very eager to have a go on the bouncy castle.

Although she described herself as a full-time mum, Mrs Sinnamon also works part-time at Fulton Hogan doing administrative work.

She is on holiday from that and, although her family is staying at home in Alexandra, she described Omakau as a "great wee spot".

They were far from the only family picnicking at the races yesterday, with thousands of people sprawled on rugs or perched on chilly bins in the grandstand, on the grass embankment or under the trees.