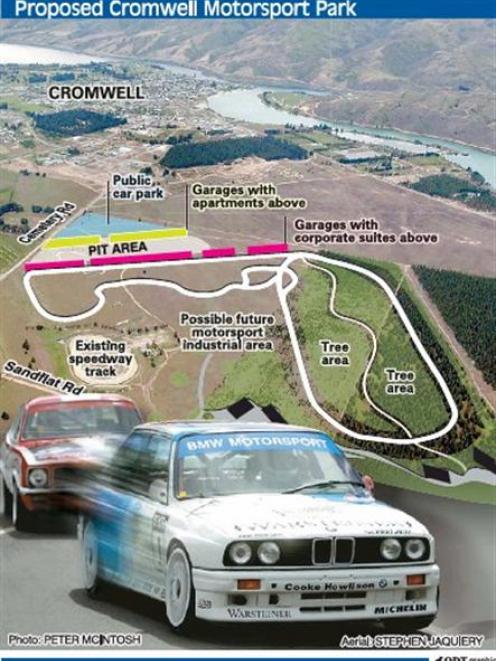 Plans for Cromwell's $20 million motorsport park were still on track although the "cautious" state of the international automotive industry meant construction was unlikely to begin tomorrow, one of the directors said yesterday.

The five directors of the Cromwell Motorsport Park Trust met earlier this year and agreed to continue with their plans, director Allan Dippie said yesterday.

The Environment Court dismissed an appeal by 16 Cromwell residents in November last year against the consent issued for the park.

The plans included construction of a vehicle testing facility, motorsport racing venue, specialist driver facilities and an associated commercial and retail complex next to the existing Central Speedway.

The trust had already purchased 92ha from the Central Otago District Council specifically for the development , which was designed to complement existing vehicle testing facilities at Wanaka.

Mr Dippie said there was no suggestion that plans were "on hold".

"We're putting in some serious planning towards making it happen but it's very dependent on the international vehicle testing market and, as you know, the car manufacturing industry worldwide is not in good health at the moment," Mr Dippie said.

The vehicle testing facility was the major component of the complex but the international automotive industry could best be described as "cautious".

Because of that uncertainty, he could not suggest when construction of the Cromwell facility was likely to begin.

"I'd love to have it ready tomorrow and we need the extra jobs it will bring to the area, and the multiplier effect the work will have, but we're not immune to what's happening internationally."

Behind the scenes, there was still a lot of work going on that needed to be done before bulldozers moved in to start construction, Mr Dippie said.

"We always knew it would be a long-term project and it's still very viable," he said.

There was no intention of scaling back the project.

The Environment Court decision restricted motor racing to a maximum of 16 days a year but the motor racing was only one part of the overall proposal.

"The main project is an industrial park and associated motorsport is just one part of that - the most controversial part of it. There are conditions on that activity and we can certainly live with those."