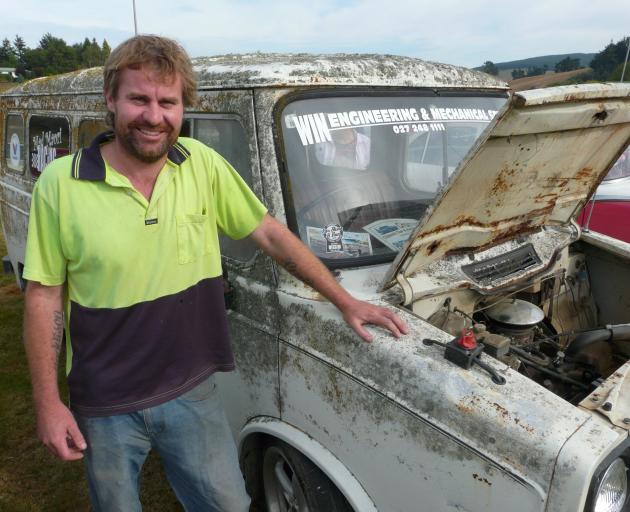 Darcy Win, of Lawrence, and his unconventional entry at the Lawrence Show & Shine event on Saturday, a 1980s Leyland Sherpa. PHOTO: RICHARD DAVISON
It was a case of the good, the bad - and the downright ugly - at Lawrence Car Show & Shine on Saturday.

The annual show will be the last in its current format before moving to a three-day slot and new grounds next year, in a bid to expand and consolidate the event on the auto-enthusiast calendar.

Part of that expansion will involve the installation of a purpose-built "burnout pad" in the town's Weatherston's Gully, and at least one entrant present on Saturday has designs on raising funds for the new facility, albeit in a somewhat unconventional fashion.

When local garage owner Darcy Win stumbled across a well-seasoned 1980s Leyland Sherpa van languishing under some trees near his home, he saw inspiration rather than desperation.

As an aficionado of the fine art of the burnout [spinning a vehicle's tyres until they smoke and burst], he sensed an opportunity to raise money for the future event's dedicated pad.

"I thought we could scrap it, or I could use it for burnouts. As you can see, it's pretty awesome with all its moss and lichen, and obviously starts a few conversations when I take it round show and shine events. It just makes people laugh and helps promote sponsorship for the new pad."

Those giving to the cause would receive a lifetime's recognition through sponsor signage at the facility, and an invitation to the inaugural burnout, at which the Sherpa would christen the pad with a full-throttle test launch.

Originally sporting a "wee four-cylinder", the van had since received a more fitting upgrade for burnout purposes, Mr Win said.

"She's got a 350 Chev engine in there now. That puts about 290 horsepower through the wheels, so she goes all right."

Although funds towards the pad were piling up well, Mr Win did not expect a podium finish from his well-vegetated entry on the day - "let's just say I won't be holding my breath for `best groomed'."