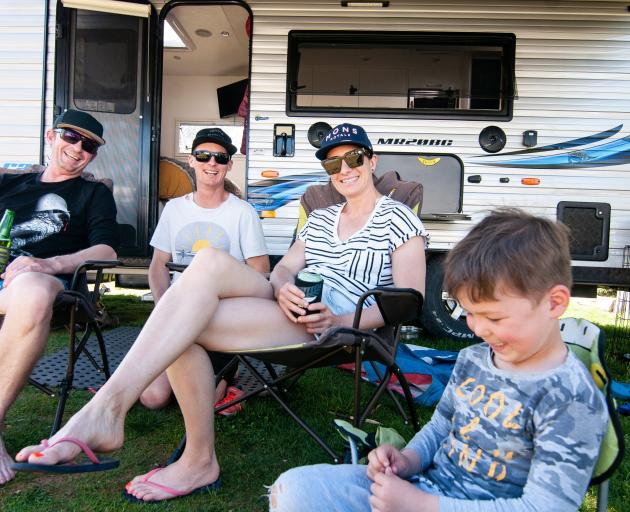 Camping at the Wanaka Lakeview Holiday Park for Labour Weekend are Queenstown locals Quintin McCarthy, Dean Moyes, Carly McCarthy and Leon Moyes (5). Photo: Shannon Thomson
There is little or no room at the inn at some Central Otago camping grounds this weekend but others still have space.

Clutha Gold Cottages owner Christine Bennenbroek said the last spaces at the Roxburgh campground were snapped up by holidaymakers on Thursday evening.

Otherwise, the four cottages, one house and 19 powered sites had been prebooked in ‘‘well in advance’’.

In terms of Covid-19 impacts, the past 19 months had been different but she also had a stable base of returning customers, Ms Bennenbroek said.

‘‘They often come and as they leave they say I’ll book again next year — I can’t complain.’’

Naseby Holiday Park owner Beth Connell said that bookings for this weekend were healthy after two events were cancelled earlier in the season.

‘‘Because of that this is the first weekend of the season really.’’

Covid-19 restrictions had meant guests had to be spaced across the combination of cottages, cabins and sites.

That meant all 50 powered sites, 11 cabins and about 25 camping sites were full.

While many of those staying were ‘‘repeat offenders’’ a few families had taken the last spots.

Covid-19 impacts had been mitigated by the Lake Dunstan Cycle and Walking Trail, which had created a bit of a boom in visitor numbers since it opened, she said.

In Alexandra, Alexandra Holiday Park owner Janice Graham said numbers in the campground were on par with Labour Weekend crowds pre-Covid-19, which was ‘‘encouraging’’.

It was the largest camping ground in Central Otago and had about 400 campsites and 38 different types of units and was never full at this time of year but the units were mostly full.

People had been reluctant to prebook because of concerns over alert levels and what the weather would be like over the weekend.

Other districts, though, do not seem to be faring as well.

The Albert Town camping ground is usually full of mountain bikers in tents and caravans for the first long weekend of spring.

But this weekend, the camp ground is virtually desolate, after Bike Wanaka cancelled its annual Deans Bank 10-hour mountain bike race due to Covid-19 restrictions.

Albert Town camp and Wanaka’s Lake View Holiday Park manager Natalie Ward said a few campers were bringing their caravans and setting up for the season, but it was nothing like previous years.

‘‘Our Christmas is looking pretty good. With the [Covid-19] announcements today, we have quite a lot of messages from concerned campers asking what the summer will look like. Personally, we are all really waiting to be advised, ’’ she said.

She empathised with people holding off bookings because of the uncertain situation.

But with good weather in the forecast, campers could still enjoy a Wanaka holiday this weekend, she said.

Queenstown Top 10 Holiday Park director Steve Edwards said he hoped yesterday’s Covid-19 statement would encourage people to get out and about over summer.

‘‘We are hopeful that with the announcement made today we may see some North Islanders coming to stay over the summer period and are looking forward to South Islanders moving around to support local businesses.’’

With changing alert level restrictions, people were not planning their holidays as far in advance, Mr Cowles said.