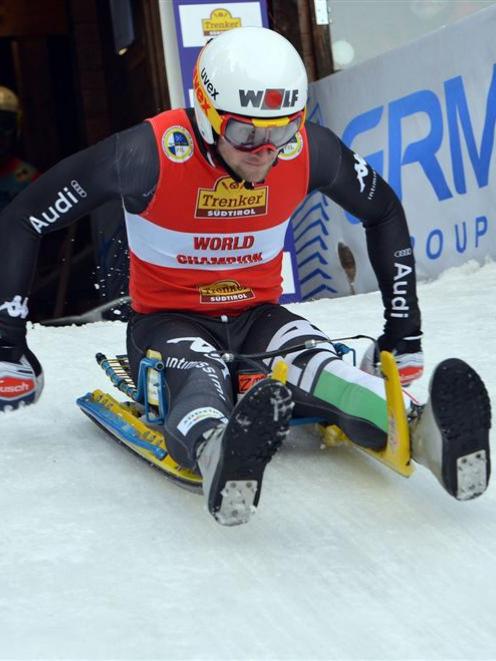 Patrick Pigneter, of Italy, in the Natural Track Luge World Cup. Photo by Fil/Sobe.
While summer temperatures in New Zealand have at times felt wintry, two young athletes have chosen to forgo the sun and spend their summer holidays on ice.

Josh Fogo (15), of Naseby, and Jack Leslie (16), of Christchurch, have been competing in the Natural Track Luge World Cup series in Europe.

Last weekend saw them compete in the third world cup race, finishing 22nd and 36th respectively in a field of 46 at Passeier, Italy. It was their second race of the competition. They missed the first by choosing to have Christmas in New Zealand.

He crashed on the final corner of his last run and had to be carried off the track after crossing the finishing line.

''I've got a really sore thigh, will have a day off training and then work more on making my turns with my feet only,'' Fogo said. He sits 37th in the overall world cup standings.

''I had an OK race with a good qualifying time which I then improved on in the race.

''My skills are improving and I was much faster on this track than I was last year.

''I need to back myself to go faster around the tighter corners to continue to improve,'' he said.

The teenagers both trained with Jedrzejko on the Naseby luge track during winter last year but poor weather meant it was a short season.

They also trained with Pigneter the year before and raced in Italy and Austria this time last year. Then, Fogo finished 35th and Leslie 36th out of a field of 50 luge racers from 20 countries.