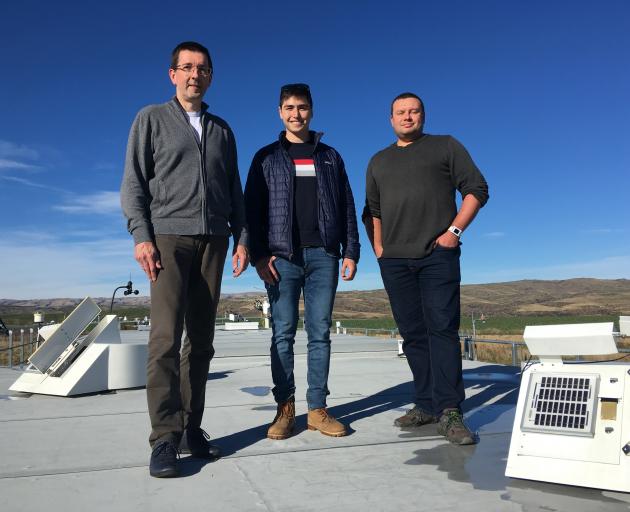 Scientists (from left) Dr Manu Mahieu, of the University of Liege, Belgium, Tyler Wizenberg, of the University of Toronto, and Dave Pollard, of Lauder, examine the solar trackers at the Lauder Atmospheric Research Station. The scientists were part of an international and national group which visited the Lauder station after a conference in Wanaka this week. PHOTO: PAM JONES
Talk about your acronyms.

More than 50 international and national scientists have had not just a meeting of minds at an annual conference this week, but a dose of long-winded titles for their organisations.

The name of the meeting is also a mouthful - the 2019 Joint NDACC-IRWG and TCCON meeting.

Central Otago scientist Dave Pollard said he wished organisers would change the name of the meeting - "it's obvious none of us work in marketing".

Mr Pollard, an atmospheric scientist at Niwa (the National Institute of Atmospheric Research) in Lauder, said scientists had to adopt a different vernacular to shorten and simplify the wordy titles during the annual meeting.

The scientists spent Monday to Thursday in conference sessions in Wanaka, then about half of them came to Lauder yesterday to tour the Niwa site.

The scientists all worked measuring greenhouse gas emissions and were part of a global network that collectively monitored long-term changes in atmospheric composition and radiation, validated and calibrated satellite sensors, and learnt more about the causes and effects of climate change and interactions between global warming and ozone depletion, a Niwa spokeswoman said.

This week, they discussed how to make their measurements more accurate, how they could work out the sources of carbon dioxide and where the carbon sinks were.

"Sometimes, we can work collaboratively with somebody from a different country on a project for years and not have met them," Dr Mahieu said.

"It's good to meet people after only knowing them through email. Nothing is better than to meet around the table."