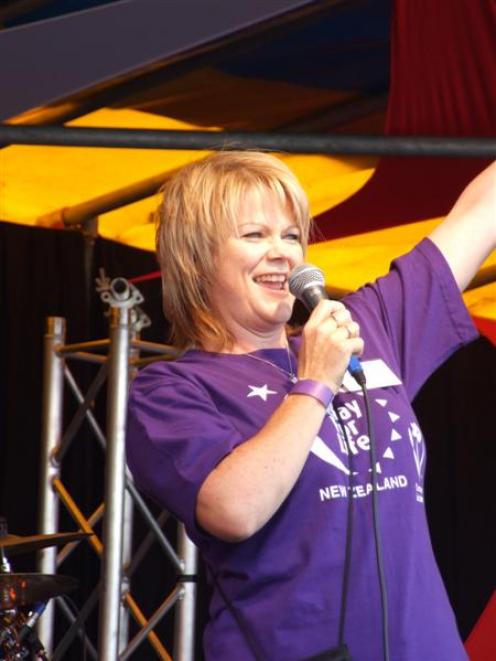 Committee member Lynn Manson takes the relay oath on behalf of team members. Photo by Lynda van Kempen.
"Magnificent" was the best word Glen Christiansen could find to sum up the first Central Otago Relay for Life, which raised $165,000.

"We look forward to doing this all again and spending this money in Central Otago," Mr Christiansen told more than 1300 people who took part in the 24-hour Cancer Society fundraiser at Cromwell.

The society's Otago-Southland chief executive, Wendy Houliston, said she was overwhelmed at the response, regardless of the amount raised.

"It seems like the entire community in Central has put their hands up for this."

The funds will be used in delivering support services in the district and also the employment of a part-time health promotion person - a first for the area.

As well, the money raised will go towards programmes in the area, including Living with Cancer and Look Good Feel Better.

Two support workers had been appointed in the past year and Marie Wales, of Queenstown, had new role - that of services co-ordinator, Ms Houliston said.

Ms Houliston noted Central Otago was very fortunate to have an extensive range of volunteers to complement the work being done by paid staff.

The 78 teams camped out at the Cromwell racecourse for the relay, travelling from all over the district to take part.

Queenstown, Maniototo, Wanaka, Alexandra, Cromwell, Omakau, Roxburgh and Maniototo people joined forces for the fundraiser and team members took turns to walk around a 420m track within the racecourse.

The event was a celebration of life as well as a time to remember those who had died of cancer.

People who had been diagnosed with cancer at any stage of their life were invited to walk in a lap of honour to start the event at noon on Saturday.

They were led by the Alexandra Highland Pipe Band and as they walked past, teams and supporters lining the track broke into applause.

About 300 took part and they wore purple sashes.

Many were also members of teams involved in the relay.

Some teams had several generations of one family while others were made up of workmates, friends or sports groups.

"One thing everyone has in common is that cancer has touched them all in some way," event manager Janie Peck said.

The mother of cancer survivor Albie Haynes (7), of Wanaka, Lesley Haynes said it was emotional.

"Seeing so many people all pulling together for a common cause - it brings tears to your eyes," Ms Haynes said.

"The atmosphere is so neat and people are mixing together and chatting as they walk along."

Her daughter was one of the lucky ones and it was incredible to be part of a 24-hour party to raise funds for cancer support services, she said.

"We wouldn't have missed this for anything."

Non-stop music entertained the crowd and Ms Houliston said everyone was clearly "having a ball".

School bands, country music clubs and musicians from all over the district featured and special guest Suzanne Lynch said she was proud to be involved.

"It's lovely to be here, and quite a privilege too."

She has been tutoring singers for another series of Stars in their Eyes but enjoyed her quick trip to Central Otago.

Team Tarras raised $13,000 for the event, which Ms Peck said was the highest amount raised by an Otago or Southland team.

"That community support is what makes Tarras the place it is," team captain Heather Perriam said.