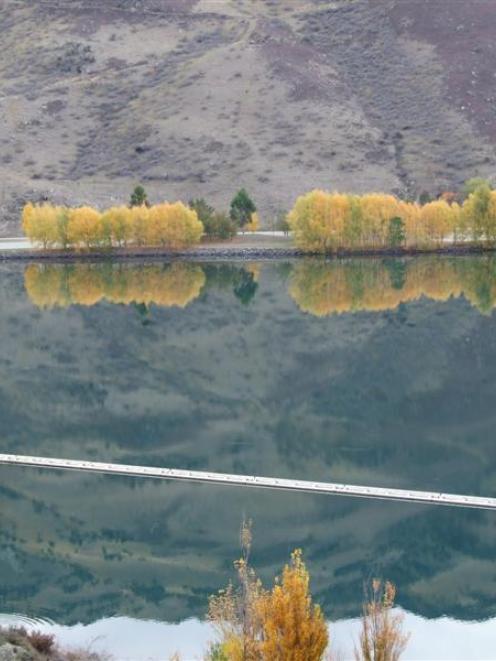 Clyde dam on Clutha river. Photo by Dianne Brown.
Contact Energy has withdrawn plans for further hydro development on the Clutha River and will review management and ownership of its land holdings near the river.

The decision, announced yesterday, comes after Contact signalled in February delays in its plans to develop a new hydro-generation facility on the Clutha River, saying the project was on the "back burner" and geothermal energy remained a priority.

Contact spokeswoman Janet Carson said at the time the four Clutha hydro-development options, at Tuapeka Mouth, Beaumont, Queensberry and Luggate, "remained open", but were "more likely to be further down the track, probably into the next decade".

Contact announced in 2008 it was revisiting plans for dams on the upper and lower Clutha, costing between $300 million and $1.5 billion, which were originally proposed more than 20 years ago by its predecessor, the Electricity Corporation of New Zealand.

Contact hydro projects manager Neil Gillespie confirmed last night he had notified "as many of the stakeholders and people that we've talked to over the last three years" of the formal decision to end the Clutha hydro-development project.

"Contact has decided not to proceed with any of the options being investigated for hydro-generation development on the Clutha at this time and has ceased all work pertaining to it," Mr Gillespie's email yesterday to affected parties said.

However, he told the Otago Daily Times last night he could not permanently rule out hydro development on the river, as "who knows what the future holds".

Contact will now review future management and ownership of all its land holdings near the Clutha River as part of its ongoing land management strategy.

Mr Gillespie was unable to provide details on the extent of that land, but confirmed selling it was "one of the options that could come out of [the review]".

In a media statement, Contact chief executive Dennis Barnes said the company's investigations during the past three years had shown none of the options considered were viable for development.

"It has become clear that all future Clutha hydro options came in at a much higher cost per megawatt to build than the next available new geothermal and wind-generation options. On current demand forecasts, the Clutha options are not economic in the foreseeable future," Mr Barnes said.

"Contact has a range of new generation in the pipeline, either confirmed, consented or under construction, to meet foreseeable electricity demand for our customers."

Clutha River Forum, an alliance of river and conservation groups opposed to "think-big" hydro development on the Clutha, was set up in 2009. Forum co-ordinator Lewis Verduyn, of Wanaka, said yesterday's announcement was not a surprise.

"For some time now, we have known that New Zealand energy companies have been experiencing a low-growth environment in the wake of the global financial crisis," Mr Verduyn said.

"Consumers are cutting back, capital costs remain high, lake storage levels remain erratic, and there is now sufficient new generation either coming online or consented for some years ahead.

This decision, then, must be welcomed as a sensible one for Contact shareholders and river communities alike.

"What we need most now are energy-smart technologies, since efficiency is less than half the cost of new generation. It would be reasonable to say that unless we return to pre-2008 economic growth, which isn't going to happen, that the era of large dams is over."

Mr Gillespie declined to comment about how much Contact had spent developing the Clutha project, as it was "commercially sensitive".