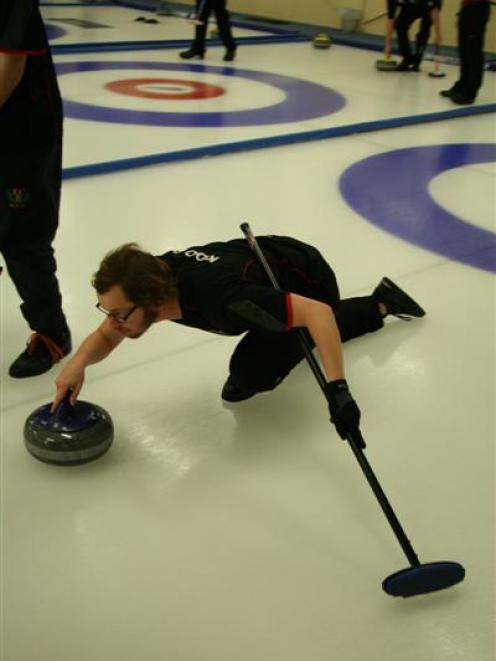 Stonehenge member Kieran Grieve, of Auckland, a moment before he releases the stone. Photo by Liam Cavanagh.
New Zealand's top curlers were at Naseby at the weekend for the New Zealand National Curling Championships.

Hosted by Maniototo Curling International Inc, the competition also attracted national selectors to watch self nominated players seeking a chance to represent New Zealand at the Youth Olympics and competitions in Finland, Switzerland and Kazakhstan.

''There's quite a lot of pressure on them to perform,'' Mr Inder said.

Secretary and chief umpire Murray Petherick said it was the ''flagship'' curling event in New Zealand, with men and women's fours divisions in juniors through to seniors.

Sean Becker, an Olympian, said it was the first time his team had played together and it was nice to ''come out on top''.

The week had been about ''getting a feel'' for the ice and each other but confidence grew as the weekend progressed, Mr Becker said.

''It was close battle the whole time.''