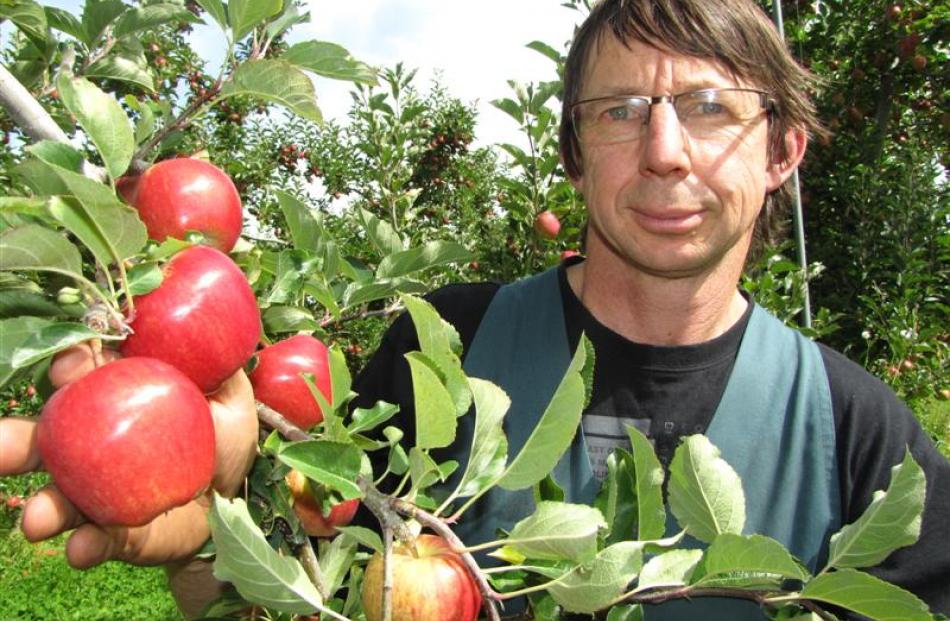 Pipfruit New Zealand director and Ettrick apple grower Stephen Darling with some of his Royal Gala apples that will not be going to Australia this season because of the high cost needed to comply with Australian import regulations. Photo by Sarah...

Central Otago orchardists say although last year they won the right to send apples to Australia, the protocols governing the exports are so strict they make it uneconomical to ship apples across the Tasman.

After a 90-year ban, New Zealand apples can now be sold in Australia.

The issue became a long-running transtasman row, culminating in a three-year legal dispute involving the World Trade Organisation that was settled in New Zealand's favour in November 2010.

Last August, Biosecurity Australia gave the final go-ahead by releasing a set of protocols exporters would have to adhere to, but Central Otago orchardists say the protocols are prohibitively strict.

"In my view, the level of scrutiny that they are choosing to exercise is basically a non-tariff barrier ... for us in Otago at the moment the viability of sending to Australia is uneconomic due to the compliance costs," Pipfruit New Zealand director and Ettrick apple grower Stephen Darling said.

"I am confident in Otago our growing conditions and relative freedom from most major pests give us an advantage in supplying the Australian market.

"However, at a packhouse level, the rules and protocols in relation to how the packhouse is run in order to meet Australian requirements - high level of auditing and direct costs - make fruit uneconomical, especially in this first year."

To be able to export apples to Australia, a packhouse needs Ministry of Agriculture and Forestry (Maf) accreditation.

This season, 10 packhouses from throughout New Zealand were chosen by Maf from the 25 put forward.

Mr Darling's was the only packhouse in Otago to be chosen and he got partway through the process of gaining accreditation before withdrawing because he saw it would be too pricey this season.

"There's a huge amount of time and resources required to monitor and record and verify everything that we do . . . [it's] become overrun with regulations when what we are trying to do is put fruit that meets the requirements in a box.""We have no problems supplying every other country and some have quite stringent requirements . . . I think the level of requirements in Australia is excessive."

Otago Regional Fruitgrowers' Committee chairman and Cromwell grower John Webb said he also was "not particularly interested" in the Australian market at the moment because of the protocols.

Mr Darling said he would watch the results of this season and re-evaluate his position before next season.

Some small shipments of apples were sent to Australia last year but three were rejected as they failed to meet biosecurity standards because of the leaf-curling midge or leaf litter.