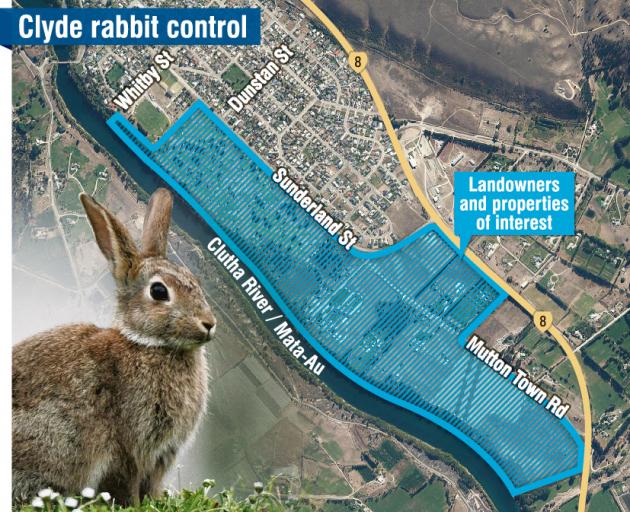 Clyde residents are being to advised watch their children, dogs, and what they eat as a large-scale rabbit control operation starts on Monday.

Weather-dependent, carrot bait laced with anticoagulant poison Pindone will be laid over four weeks to control rabbits in the town.

The Central Otago District Council in a post to social media advised people not to handle the bait, watch children at all times, not to eat animals from the area or within 2km of it, and not to allow dogs access to animal carcasses.

The carrots will be dyed green to allow people to easily see and avoid them and no bait will be laid within 20m of a building or house.

Tracks and reserves near the operation area will be clearly signposted.

The collaborative rabbit control operation — co-ordinated by the Otago Regional Council (ORC) — involves and is funded by multiple landowners, including the Central Otago District Council, Southern District Health Board, Department of Conservation, and private landowners on the east side of the Clutha River.

ORC manager biosecurity and rural liaison Andrea Howard said the joint operation was the first of a new collaborative engagement process being developed by the council.

"The approach is to bring landowners affected by rabbits together to look at the problem and work co-operatively on solutions."

The control operation was the result of that process in Clyde.