Water leaking from an unknown source is persistently trickling down a bank in Alexandra, compromising the houses above it.

The mysterious leak, which appears to be coming from a source on Old Bridge Rd, has been flowing on to the Roxburgh Gorge Trail, flooding the side of the track since July.

Old Bridge Rd resident Russell Butt, whose property sits directly above the bank, said the problem had been an issue off and on for several years.

‘‘I am concerned because I don’t know how much damage it is doing under our house.’’ 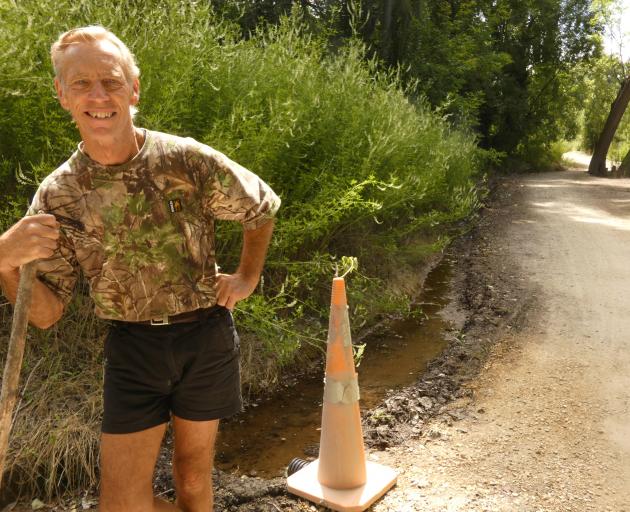 Barrie Wills, co-director of Central Otago Clutha Trails, inspects a section of the Roxburgh Gorge Trail which has been turned into a bog due to water leaking from a spring or main. The affected area is off to the side of the track, in Alexandra. Photos: Alexia Johnston
Central Otago Clutha Trails co-director Barrie Wills said despite investigations it was not known exactly what had caused the leak or where the water was coming from.

He thought it could be a leaking spring, or a problem with a nearby property’s water main.

He said if the issue was not resolved soon, it could create severe problems later on — particularly if the bank started to slump below neighbouring houses.

‘‘It has been wet for ages so that does concern me.’’

The Central Otago District Council was notified of the issue and arranged specialist contractor Detection Services to check the reticulation in Old Bridge Rd and O’Neill Cres for any leaks.

Water from a mysterious source is encroaching on Russell Butt’s Old Bridge Rd property in Alexandra.

Infrastructure services executive manager Julie Muir said three water leaks in the council water supply pipes had been repaired in July last year and a private property owner was also advised of a leak on their property.

Two further leaks in council reticulation were repaired in December and several leaks on private land were discussed with property owners, who were advised to make repairs.

Meter readings for properties in the area were also checked in December, but there were no high readings that would
indicate water leaks on private land.

‘‘Detection Services has completed a further assessment of the area in January to confirm no more leaks are present in
council reticulation. Findings of this work are not yet known,’’ she said.

‘‘We believe that the remaining problem could be a result of ground water in the area.’’

The water was tested for chlorine, but none was detected, which would back up the ground water theory, she said.