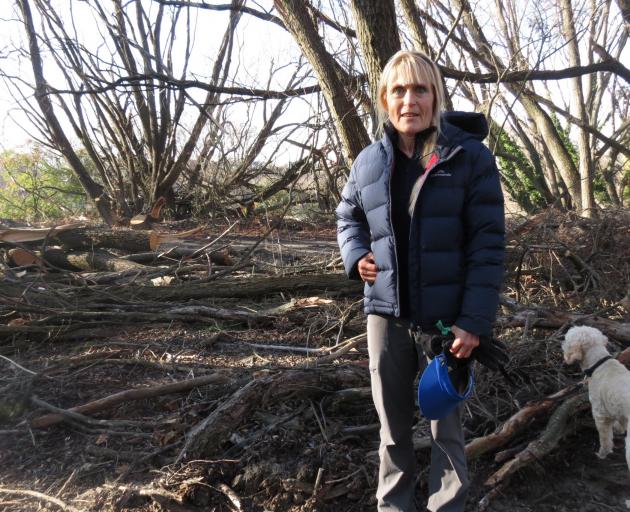 Alexandra resident Glenda Thompson walks her dog, Otto, on the Anniversary Track regularly and was horrified at the number of trees felled. PHOTO: TRACIE BARRETT
Regular users of the Alexandra-Clyde 150th Anniversary Track, commonly known as the River Walk, are upset at what they see as indiscriminate felling of trees along the track.

Central Otago District Council said more trees were removed than intended after being damaged by felled trees, but that parks officer/contracts Steve O’Kane had conducted a site visit, and was happy with the work completed.

Neighbouring resident Glenda Thompson said the council decided to do "some proactive pruning" citing safety concerns, and recently erected a notice saying the track would be closed for a week until 3pm while work was done.

She said she and other regular users of the trail thought the amount of trees removed and the resulting mess was "disgusting".

"I was absolutely horrified at what they were doing. They got an excavator in, which was grinding up the track, and were knocking trees over wholesale.

"A lot of the trees naturally lean over but were perfectly sound."

John Claridge, a regular walker on the track, said he was surprised at the extent of the felling.

Council parks and recreation manager Gordon Bailey said all tree decisions on the track were undertaken following advice from the council’s arborists, and the trees were monitored regularly throughout the year.

Remediation of the area would be carried out in July, he said.

Mrs Thompson said the track was the only shady walk in Alexandra or nearby, and felling so many trees made it lose its charm and character.