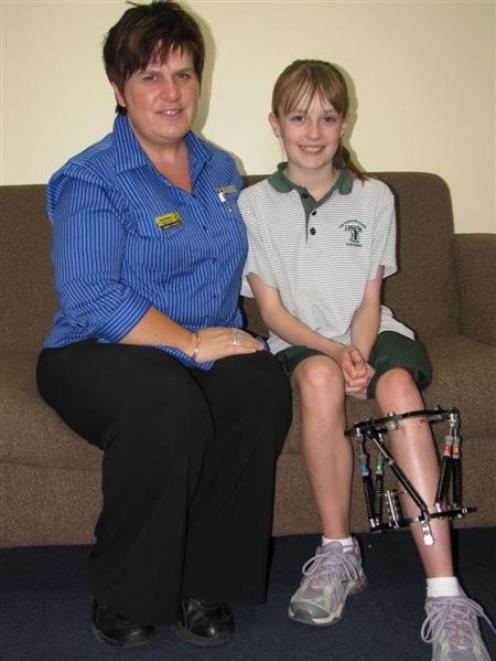 Dana Jenkins (12) says Ronald McDonald House is her second home, and her mother, Leeanne Jenkins, has nothing but praise for staff at the house. Photo by Sarah Marquet.
Dana Jenkins, a friendly and outgoing 12-year-old from Alexandra, says her friends think she is lucky not to have to exercise but "I just want to get out there".

Although she ran when she was younger, she now has a large metal brace on her leg which prevents her from running around like her friends.

The brace, which she has to wear for six months, was attached during an operation in May this year to stretch her leg.

She was born without the fibula bone in her right leg.

This meant she had no ankle, the tibia, the other lower leg bone, was buckling, and her hips kept dislocating. Now, she also has a curved spine.

At the ages of 3 and 4, she had four operations during which surgeons took slivers of bone from her femur to cover her hip sockets.

She also flew to Auckland to see a specialist as doctors were discussing amputation.

This visit to Auckland was her first of many experiences with Ronald McDonald House which provides free accommodation and support to families with children in need of hospital treatment.

Her mother, Leeanne Jenkins, described it as an "awesome experience" and had nothing but praise for the houses and staff who work there.

This year, Dana and her family have been to Christchurch and stayed in the Ronald McDonald House there seven times, each for between two and 10 days.

The 10-day stay was for the operation in which Dana received the leg brace.

Mrs Jenkins said Dana's bone was cut straight through the middle and rods were attached which fix to shunts.

Those shunts pull the pieces of bone apart by about 1mm a day to stimulate growth.

At first, Dana was in a wheelchair and the brace covered her whole lower leg and foot. Then she learned to walk with crutches and eventually, with the smaller brace, got back to walking without assistance.

Dana said, "It hurt . . . especially went I got to bed and wasn't focused on anything else".

"At first it was uncomfortable to get around but now it feels normal."

Mrs Jenkins said she had great difficulty finding accommodation in Christchurch when Dana needed her first operation because it was not long after the February earthquake and all the motels she called were booked out.

She then approached the house and said they were a "lifesaver . . . such a godsend".

Dana said, "It's our second home, it feels like home."

Although she cannot run around with her friends, Dana is a keen swimmer and enjoys swimming with them.

She also swims with the Paralympics New Zealand Development Team in preparation for the paralympics in Rio de Janeiro, Brazil, in 2016.

She knows she might have to do this all over again when she is 17, but Dana said she was looking forward to running around with her friends instead of watching them.

"They have all said they will run laps around the field with me."