Fighter jet a hit with the locals 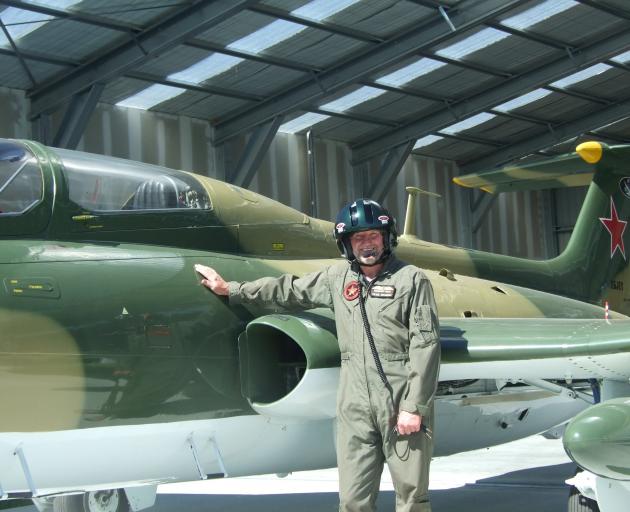 Aviation enthusiast Peter Meadows has taken the two-seater jet to the Otago skies frequently over the past few years having relocated south from Tauranga in 2013.

But after a stint in the Lakes district, the 65-year-old relocated to Central Otago in 2017 and his prized Delfin fighter resides at Alexandra's aerodrome.

''If I start the jet up and take off, I see people leaving their homes and getting into their cars.

''By the time I land there's up to 20 cars waiting to kick the tyres and chat about [the jet].

One of the Eastern Bloc's most successful aircraft designs, the Delfin was widely used in the Soviet Union as the Warsaw Pact's primary advanced trainer for more than a decade, from the early 1960s to the early 1970s.

Mr Meadows has been a pilot for more than 30 years.

The long-time navigator bought his Delfin jet from the United States in 2012 and has previously owned a T6 Texan, or Harvard, and a Yak-52 Soviet trainer as part of his aviation business Double X Aviation.

Mr Meadows now resides at the Alexandra Aerodrome alongside half a-dozen other permanent residents.

He had a 500sqm hangar for his jet built with an adjoining three-bedroom property.

''We've got a little community growing up there [at the aerodrome] now.

''All the sections are gone and people are starting to build their own hangars with accommodation.''

Having launched into the skies for the Warbirds Over Wanaka airshow in previous years, Mr Meadows' jet has been a recent highlight for onlookers at Blossom Festival and Armistice Day events.

Travelling at 500kmh can be an intense experience for the seasoned pilot.

''It's not a relaxing thing to fly. By the time you've looked at your gauges and altitudes and worked out what you're doing, you've covered 8km.''

After running adventure tourism and aviation businesses over the years, Mr Meadows has recently taken on a more ''hands on'' challenge for a day-to-day job.

For nearly a year, he has been the regional manager for Go Bus Transport.