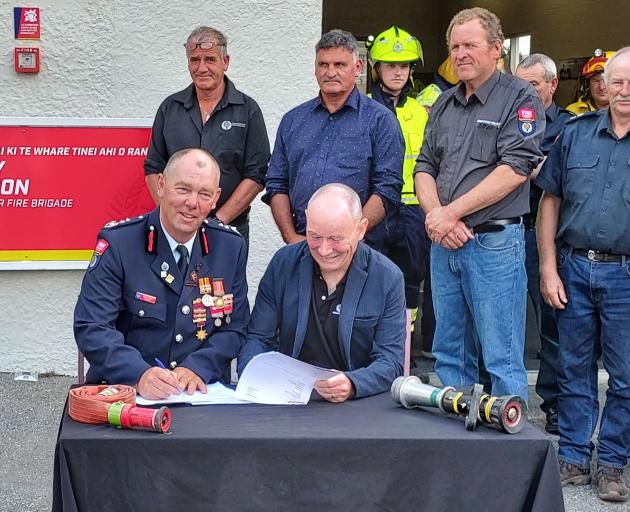 A signing at the Ranfurly Fire Station last night sealed the amalgamation of the Ranfurly urban volunteer brigade with the Maniototo component of the Blackstone volunteer rural brigade, which is based at Omakau.

It was one of the most significant amalgamations within Fenz.

"There’s been other amalgamations around the place but this is significant because of establishment numbers."

Establishment numbers referred to the cap in the size of a brigade and in this case that ceiling had been lifted, Mr Grant said.

"What it means is we can increase the size of the brigade."

It had been a "work in progress for a while" and the amalgamation would allow for a much broader set of skills and resources to be tapped into to support the Maniototo community and visitors to the small but widespread rural area, he said.

There were two state highways running through the region, and steady rural growth brought with it an increase in population, Mr Grant said.

The Ranfurly brigade averaged 40 to 70 calls each year and was backed up by the neighbouring Naseby brigade, which averaged 20 to 30 calls a year.

The area was also experiencing a growth in an ageing population, many retirees moving for the slower pace of life of the Maniototo, he said.