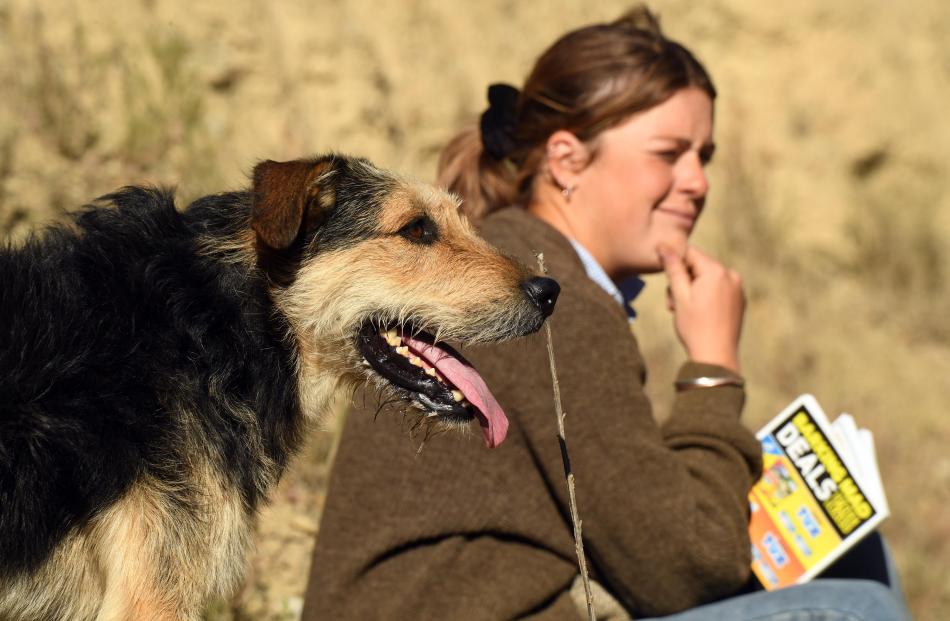 Lana Chrystal has company as she watches the action on the huntaway course at the South Island sheep dog trial championships yesterday. PHOTOS: STEPHEN JAQUIERY 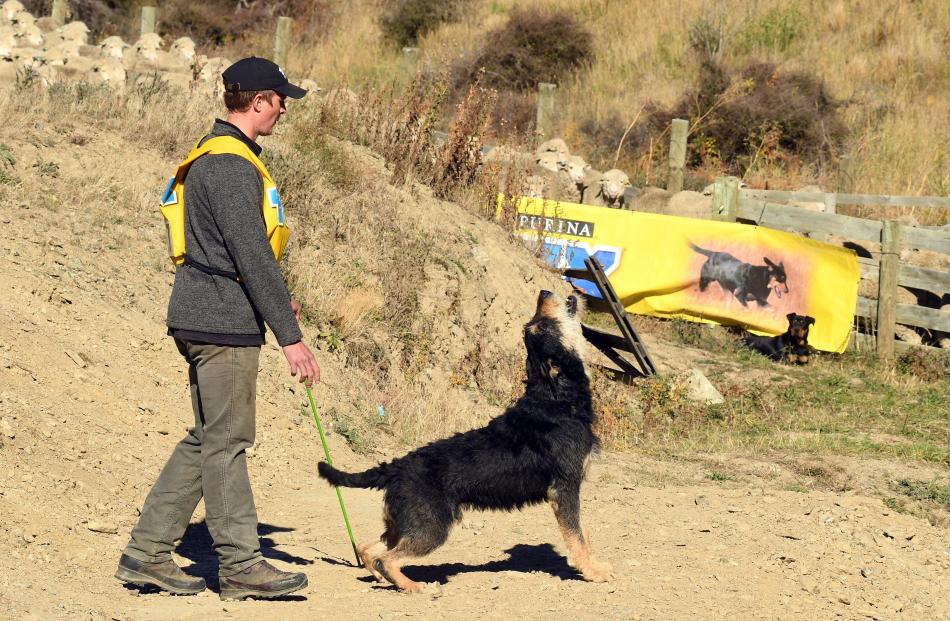 Ben Harris, of Rugged Ridges, near Otematata, and Slope get the judge’s nod to start the straight hunt course. 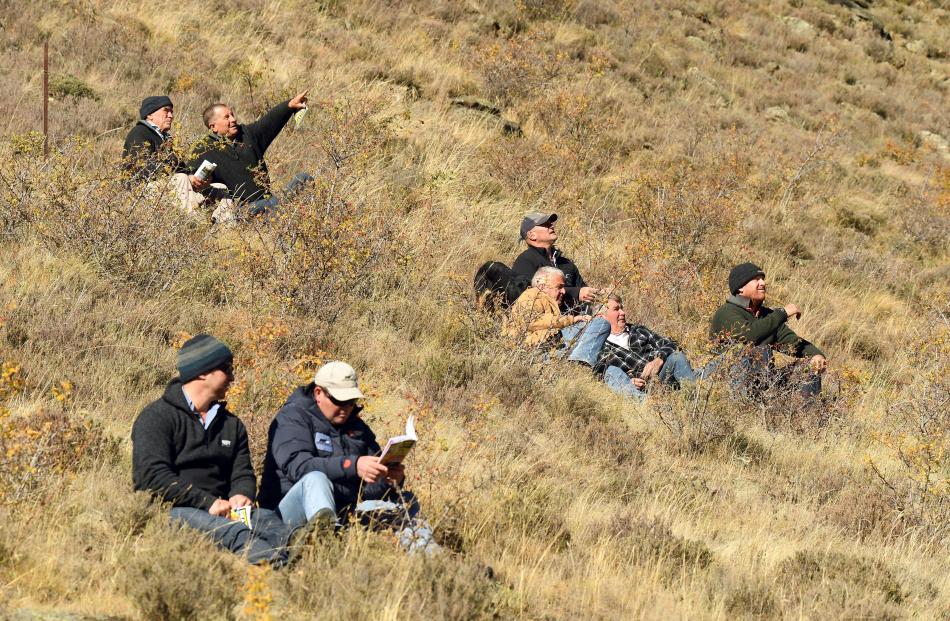 Spectators watch the action, amid the tussock and thyme, on the huntaway course. 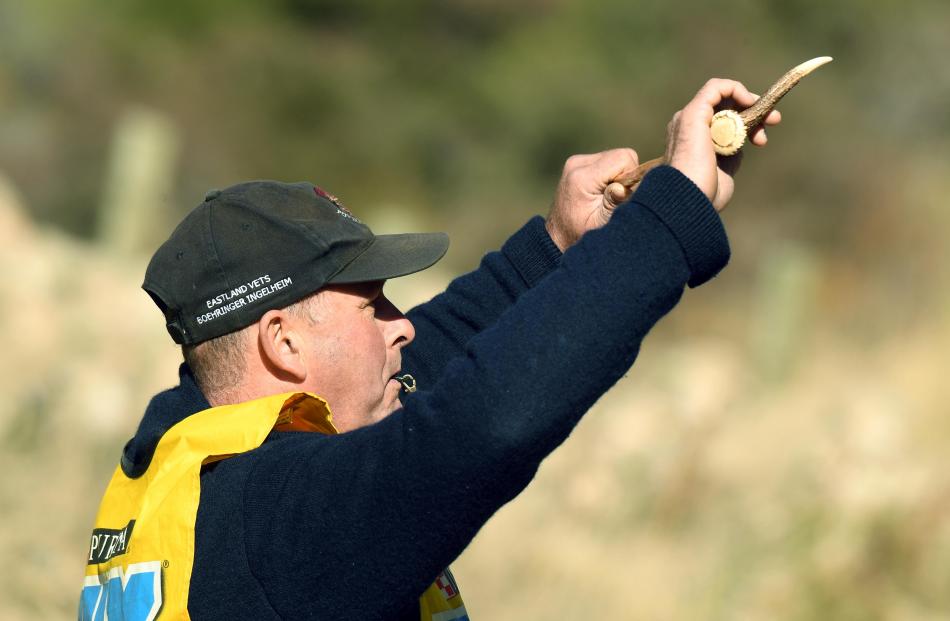 Brian Sparrow, from the Greenvale dog trial club, whistles commands to Jerry in the straight hunt. 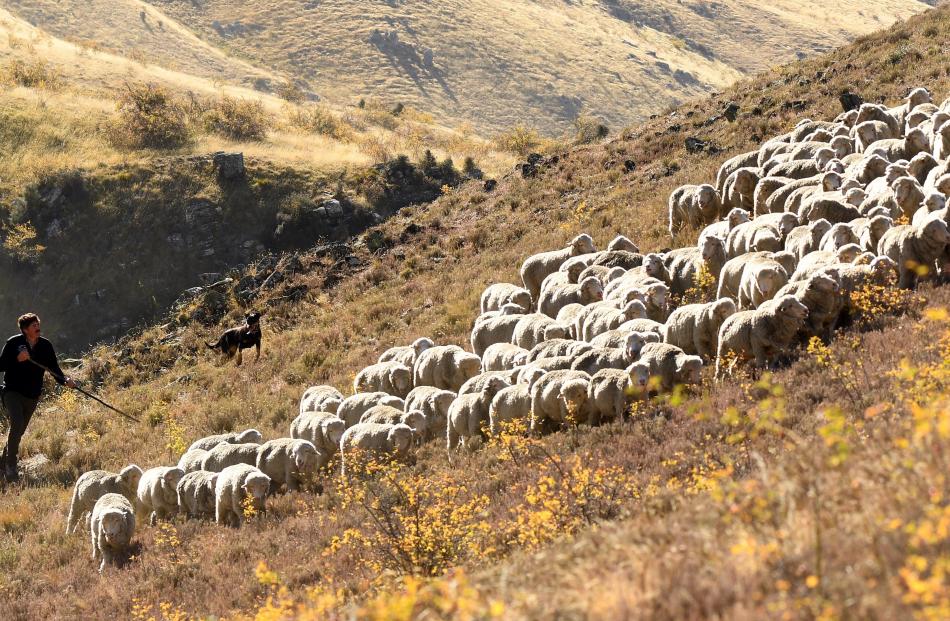 Dave Kenny, one of the many helpers at this week’s South Island sheep dog trial championships at Earnscleugh Station, delivers merino sheep through the thyme and briar to the straight hunt course.

Dog triallists are a dedicated bunch.

Father and daughter Clark and Lana Chrystal left home in the North Island at 1am on Saturday to catch the Cook Strait ferry, before driving six hours on Sunday from Amberley to Alexandra for the South Island sheep dog trial championships.

While Mr Chrystal was an experienced triallist and had competed in many run-offs, it was his daughter’s first time competing in the championships.

Miss Chrystal (20) got her first dog when she was 16 and ran him when she was still at school. She went shepherding two years ago and this was her third season competing in the sport.

She grew up on a dairy farm — having a dairy farming, dog trialling father did cause some amusement — and she now worked on a large property on the Napier-Taihape Rd.

She was "super excited" to qualify two huntaways, Belle and Carla, for the South Island championships. "I couldn’t believe it," she said.

Her father got both dogs as pups and he broke Carla in, while Belle was the first huntaway she had broken in herself. Belle qualified first and then Carla was a last-minute qualification just over a week ago.

The courses were big at Earnscleugh Station and very different from those in the North Island, and Miss Chrystal admitted she felt "a little sick" when she first saw them on Sunday.

She had also never worked merino sheep and expected to be very nervous.

"I’m just hoping that my dogs do the best they can and not be naughty," she said.

But she loved seeing the results of the work she put in to her dogs paying off and to have the opportunity to compete.

Her father was a role model; someone she looked up to in the sport, and she enjoyed travelling down and spending the week with him. "He’s a bit of a hero, yeah," she said.

Later this month, she would line up for the New Zealand championships, which were only about an hour and a half from where she worked, so it would be a much shorter commute.

The leaderboard at the South Island Sheep Dog Trial Championships at the 4pm call yesterday (in no particular order). —