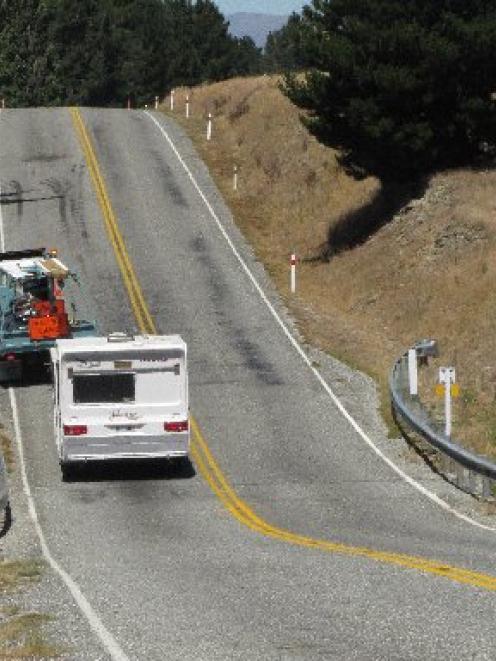 The Albert Burn Bridge on SH6, the site of yesterday's three-truck accident believed to have been caused when one truck slowed for a cyclist. The dip in the road is dangerous, police say. Photo by Marjorie Cook.
Emergency services in Central Otago were kept busy yesterday dealing with four unrelated traffic accidents, which injured five people near Ranfurly, Ettrick and Fruitlands and at Queensberry.

The first crash occurred about 8am, on the Ranfurly-Patearoa road, when a car with four male occupants in their early 20s struck gravel and the driver lost control.

"It rolled, jumped a fence and ended up upside down in an irrigation ditch," Ranfurly chief fire officer James Hazlett said.

Three of the occupants, all from the United Kingdom, were airlifted to Dunedin Hospital with moderate injuries, while the fourth, a Ranfurly man, walked away uninjured, he said.

About midday, a 64-year-old Dunedin woman travelling to Wanaka fell asleep at the wheel on SH8, between Ettrick and Raes Junction.

Senior Constable Jape Wanoa, of Roxburgh, said her vehicle "went up in the air" and "ploughed" into the Te Mahanga Orchard.

"She wouldn't have survived if she wasn't wearing a seat belt."

She was taken by ambulance to Dunedin Hospital with a suspected fractured sternum.

Senior Constable Mike Colligan, of Alexandra, said just before 4pm, on the Alexandra-Fruitlands road, near Conroys Gully, a car containing three women left the road after it "swiped" another car.

Cromwell police are urging cyclists and motorists to take care at a "tricky piece of road" on State Highway 6, at the Albert Burn Bridge, near Queensberry, after a three-truck accident just before 10am yesterday in which a truck driver was injured. One lane of the road was closed for a short time.

The driver was taken to the Cromwell Medical Centre by St John with leg, arm and head injuries after he was freed from the truck by Cromwell Volunteer Fire Brigade members, using cutting equipment.

Constable Dean Schroder said the driver was conscious after the accident and his injuries were not believed to be serious.

The road cyclist, who had started his training ride in Cromwell and was returning to Cromwell, was not harmed.

Blame was not being apportioned to the cyclist, Const Schroder said.

The three southbound trucks were travelling in a row.

The first truck and trailer driver saw the cyclist going up the hill from the bridge and slowed to give him room, because there was a double yellow line, preventing overtaking, and oncoming traffic.

The third truck then left the road and plunged about 20m-30m into a gully south of the bridge. The domino effect of the impact caused major damage to all three vehicles, Const Schroder said.

The cyclist spoke briefly to the driver of the first truck but did not stop until pulled over by police further down the road.

The cyclist had not realised the seriousness of the accident, Const Schroder said.

When the cyclist continued, neither he nor the first two truck drivers realised there was a third truck involved, or that it was in the gully and the driver was trapped, Const Schroder said.