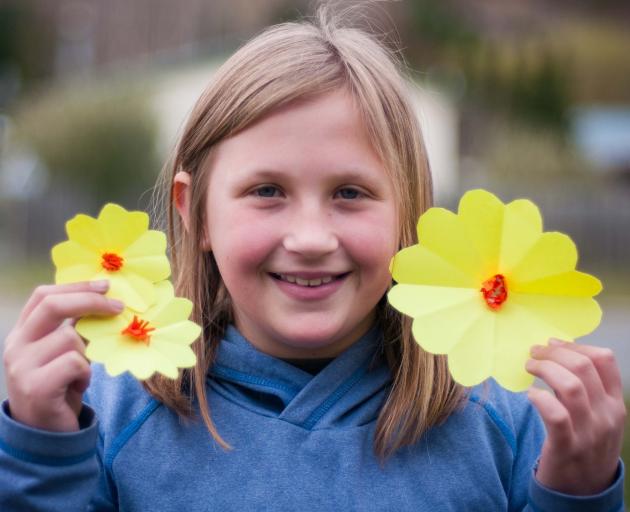 Jody Velenski (10) shows off her handiwork to raise money for the Cancer Society’s Daffodil Day street appeal, which was cancelled due to Covid-19 Alert Level 4 restrictions. PHOTO: SHANNON THOMSON
Daffodil Day’s cancellation has not fazed Clyde’s Jody Velenski, who has used Alert Level 4 lockdown to step into the breach and launched her own fundraiser for the Cancer Society.

The 10-year-old has been making daffodils by hand from yellow and orange paper to raise money for the charity after the lockdown forced the cancellation of its street appeal, which was scheduled to take place today.

Jody is an old hand at lockdown-related philanthropy. Last year, she handcrafted poppies to raise money for the Returned and Services Association.

That came after the Covid-19 pandemic and subsequent lockdown put paid to both the association’s poppy day appeal and Anzac services.

More than a year on, it is a different appeal but the same principle.

Jody’s mother, Kristy Velenski, said this time she and her daughter had been inspired by seeing posts on social media about people making daffodils and decorating their letterboxes.

She and her daughter took the idea further taking inspiration from others and formulating their own design.

"I saw how the Cancer Society would lose thousands [of dollars] and thought ‘Well, we could make some daffodils to sell for a donation’."

In lieu of the appeal, the charity was asking people to take their support online and make a donation at www.daffodilday.org.nz.