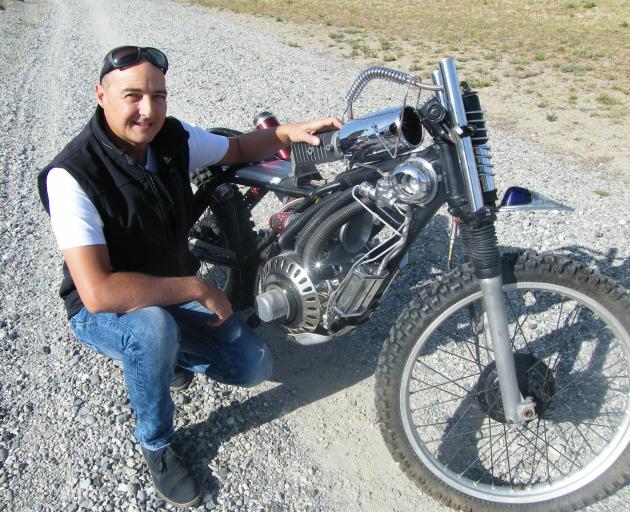 Sci-fi artist Sean Boyd shows off his ‘‘Mars Explorer’’ sci-fi bike, which will be exhibited at Trail Journeys, at the Clyde end of the Otago Central Rail Trail, for the annual Arts on the Rail Trail. Forty-five artists will exhibit art at 38 venues along the trail for the event. Photo: Pam Jones.
The Otago Central Rail Trail is usually a motorbike-free zone, but an exception has been made for a Mars Explorer creation.

The sci-fi motorbike artwork will be exhibited at the Clyde end of the rail trail for the next two months as part of the third annual Arts on the Rail Trail, although artist Sean Boyd said it would not bend the rules too much.

"It’s not really a motorbike, because it doesn’t have a motor. All the bits for the motor have been taken out and will be used for something else."

The artwork started life as a 1980  Honda XR250, which Boyd found through TradeMe.

The bike had "been in a barn for 20 years, all covered in bird poop", but Boyd soon stripped off the bike parts no longer required and added some more: an outdoor gas heater, metal pasta makers, taps, vacuum cleaner pipes, a speaker stand and old dials from the Roxburgh hydro dam.

The resulting Mars Explorer — so far the only "bike" artwork he has created  — was typical of his futuristic creations, he said.

He said he got a thrill out of repurposing what most would consider junk into heavy-duty artworks, and worked without rules or boundaries, rejecting any "steampunk" title. His work was "sci-fi art", he said.

Boyd works mostly on commissions and barely keeps up with the artworks he has on order, working full-time on his art. His art  sells around New Zealand and internationally, with people usually presenting a concept to Boyd and him adapting it to his own design.

"People want that, they want to see what I turn their idea into. They are buying my imagination."

A mechanic by trade, who has done many other jobs as well, Boyd is now planning on building himself a "real" motorbike.

Forty-five artists will have mini-exhibitions at 38 venues along the rail trail for the Arts on the Rail Trail. The event had a soft opening last weekend with a group of artists at the Hayes Engineering Works open day, in Oturehua, and all artists will have their exhibitions in place from this weekend.

The event runs for two months.