By Jared Morgan
0 Comments
An unexpected discovery at a historic gold-mining settlement in Central Otago shows people tried to create a sense of home despite the outpost being short-lived.

Southern Archaeology director Dr Peter Petchey said a large ‘‘very carefully laidout’’ oval-shaped gravel path that used ubiquitous corrugated iron as an edging had been found showing that despite living at Drybread, near Omakau, for only a short time someone involved in the gold rush had taken the time to create a garden.

‘‘It really helps in fleshing out the feeling of community and the people that were living there.’’

Excavations of an area near the original Drybread settlement concluded on Friday.

Dr Petchey said he and his team were led to the site by old poplar trees, ceramic and glass fragments from the 1880s and ’90s and corrugated iron. 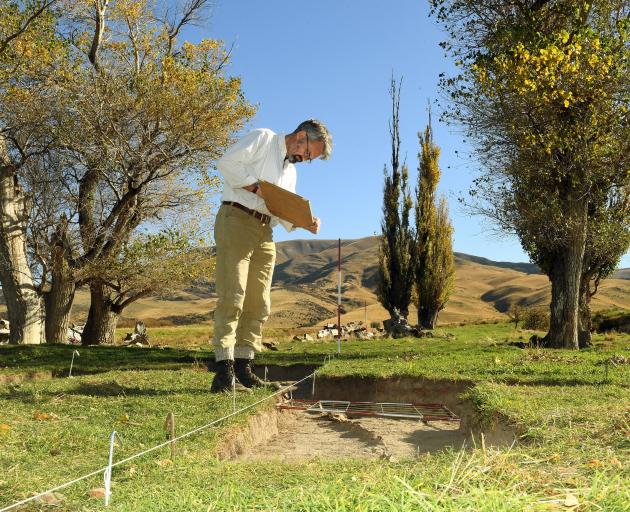 The site was identified last year by the Southern Cemeteries Archaeology project team co-led by Dr Petchey and Prof Hallie Buckley which uncovered 12 burial sites containing the remains of 10 adults and two infants at Drybread Cemetery.

Attention then turned to finding the original settlement of Drybread, Dr Petchey said.

The Drybread settlement was situated about 1.6km from the cemetery and set up below diggings above the town which was next to a stream.

The site was initially rich in alluvial gold but miners soon left for new finds, hoping they would be better.

A visitor in 1878 counted 19 miners, a hotel, two stores, and four houses but a year later it was described as lifeless, only two mining parties operating.

Dr Petchey said the chase involved in the gold rush that swept Otago from the 1860s meant moving on to the next find was common and the remains of original settlement were quickly swallowed up by the mining tailings from the diggings above.

‘‘They were coming down and filling that stream very quickly.’’

While the actual town was lost there were also houses in the diggings themselves and that was where the focus of the team turned including to the poplars where the group returned last week.

The archaeological dig, which took place on Tony and Karen Glassford’s property ‘‘Dougalston’’, was unexpected.

‘‘We went there expecting to find a little corrugated iron hut and ended up doing garden archaeology. ‘‘It speaks to the effort someone put into creating a home in the diggings.’’