By Shannon Thomson
0 Comments
Another step in the growth and progress of Cromwell Primary School was marked yesterday.

A burgeoning roll has seen the Central Otago primary school bursting at the seams — a reflection of what is happening in the wider region — and the next stage in its expansion is set to break ground in the coming weeks.

A new hub to house a four-teacher work space and up to 120 pupils will be completed in about six months.

The project is being funded through the Ministry of Education’s capital works team due to being deemed a roll growth build.

A special "ground blessing day" was held at the site of the new hub with primary school staff and pupils, families and ministry representatives in attendance. 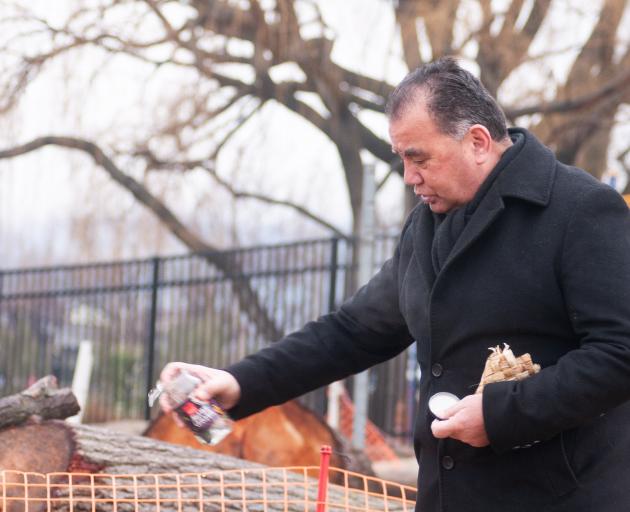 Belle de Villiers (5), the school’s newest pupil — having only started school on Monday — was to assist the politicians but shyness took over even with mum Cherece and brother Quade (11) there in support.

Principal Matthew McCormick said the ground blessing was a "really special day" and the project reflected the region’s growth.

"This is a really exciting project for us, it’s been in the works for quite some time.

"It’s in response to a growing roll at Cromwell Primary School which is a sign of the times of the progression and growth that we are seeing in the Cromwell region.

Cromwell Primary School kapa haka members Timana Nepe (9), Jono Hansen (10) and Louis Miller (10) perform a haka.
"What it will be is an innovative space and a flexible working environment that will cater to collaboration as well as ... a number of different learning types."

There are about 360 pupils at the school, but that number is expected to rise to 380 by the end of the year.

The school has been the focus of several building projects in recent years, including junior and senior learning hubs and a multipurpose hall.

"There’s been a lot of projects going on over a number of years now, and my predecessor and the board of trustees, two, three times over have worked hard to make sure that we are providing our children with the best learning environments to ensure they’re experiencing success into the future," Mr McCormick said.

"It will be a really important asset for our children now and into the future as well, so it’s a really exciting time."