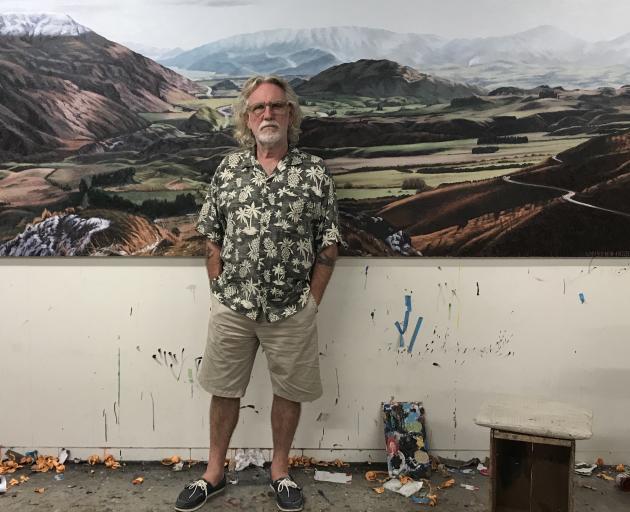 Artist Dick Frizzell is flanked by Wakatipu Basin, one of his paintings that will appear in an exhibition of his works in Dunedin later this year. Frizzell will be based in Alexandra for two or three months from Saturday as artist in residence at Henderson House. PHOTO: ROGER DONALDSON
Auckland artist Dick Frizzell will be the next artist in residence at Alexandra's Henderson House - the timing of which is "serendipitous", he says.

Frizzell is preparing for an exhibition of his works at Milford Galleries Dunedin, later this year and said many of those paintings would come from "references built up during the Alex residency".

He will arrive in Alexandra with his wife Jude tomorrow for a stint of two to three months at Henderson House.

When asked why he had accepted the invitation-only residency Frizzell said "hell, why wouldn't you? I was honoured, excited - flattered, even."

The timing was "serendipitous, actually, because I have an exhibition of Central [Otago] and Southland landscapes scheduled for October this year [at Milford Galleries Dunedin] - so the residency will give me a more leisurely timeframe to explore the region, rather than my usual `fly down and dash around in a rental' method of gathering information".

Frizzell is also working on the illustrations for a new book, entitled Me, According to the History of Art.

This was "almost entirely a desktop [computer] operation, so no need to lug half my studio down to Alex. Again - perfect timing", Frizzell said.

"Dick has been a major and popular force on the New Zealand art scene since the late 1970s, when he arrived fully formed on the fine art scene from his successful commercial art life, and has continued to stir the art pot ever since, often surprising the art establishment with his restless explorations of times and styles, his disdain for curatorial dictatorship and his remarkable graphic and painterly skills. Wit, courage, affection, intellectual curiosity, even humour are hallmarks of the Frizzell approach to painting, and his refreshingly pure love of paint itself - in all its capacities - has always characterised Dick's work ... He is a relentless, obsessive worker, a brilliant hand and an immensely enjoyable personality."