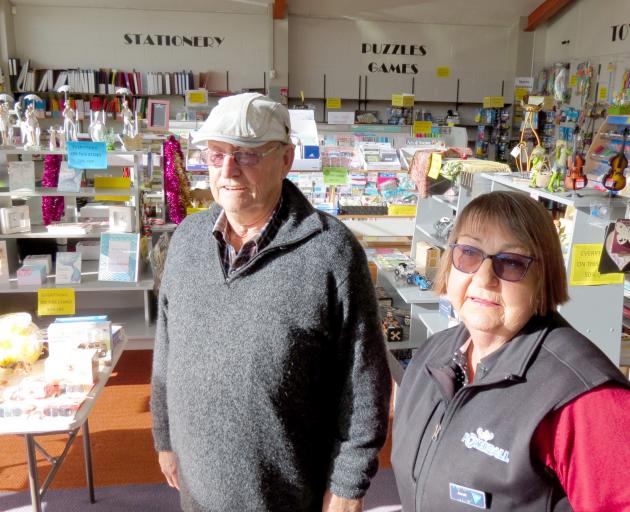 Dick and Janet Parker will close the doors to their business, More Than Books at the end of today. PHOTO: ALEXIA JOHNSTON
A long-standing Maniototo business will close for good today after being on the market for more than four years.

Ranfurly couple Dick and Janet Parker will welcome people through the doors of More Than Books one last time today, before closing the doors for good at 7pm.

There will be free ice cream while stock lasts and last-minute bargains, from stationery to giftware.

Mr and Mrs Parker bought the business seven years ago when it traded as Books and Things, with the aim of enjoying business ownership one last time before settling into retirement.

They put the business on the market four years ago, but it failed to sell, prompting them to close the doors instead.

More Than Books is the last in a long line of businesses owned and operated by the Parkers.

They owned the Balmoral Dairy from 1995 to 2000, and in 2001 bought Ranfurly Auto, where they also provided a bike hire service.

They built a new home on top of the premises, but in 2010 the building was destroyed by fire.

Their home, Ranfurly Auto workshop business and Ranfurly Bike Hire tourism operation were gutted in what was thought to be the town’s largest structure fire for at least 30 years.

They decided to focus solely on the bike hire business after the fire, but later sold it and bought More Than Books.

"We decided we were both ageing a bit and this was on the market at the time, so it’s what we did," Mr Parker said.

Both agreed it was the people they would miss the most when they finally closed the doors.

"They are not customers," Mrs Parker said.

"They are all friends, really."

The Parkers have plenty of plans for their retirement, including hopes of striking gold.

"There’s a few things I want to do like gold panning — that’s on the bucket list, but I haven’t got any yet," Mr Parker said.

He also planned to take his boat out to his "secret" location for regular fishing expeditions.

Retirement meant they would both also have more opportunity for playing bowls and spending time with family.

Mrs Parker planned to spend more time focusing on her interests, including propagating plants and seeds.

Although they were looking forward to retirement, business ownership was something they had loved over the years.

"We have had so much fun in our businesses," Mr Parker said.