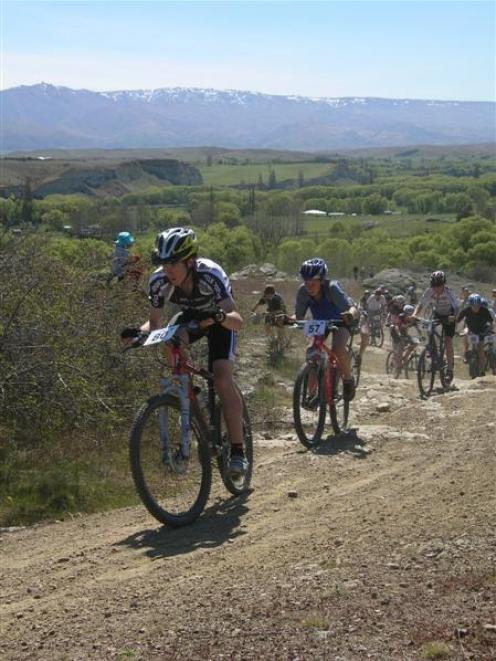 Cromwell rider James Stewart leads a pack up one of the rocky tracks in the hills above Alexandra during the 2005 South Island secondary schools mountain bike championships.
Alexandra mountain bike tracks could be developed into a world-class network, boosting the local economy, the Vincent Community Board heard this week.

The land immediately east of the Manuherikia and Clutha rivers, surrounding the clock on the hill, contained a network of 40 to 50 tracks which was heavily used by bikers, walkers and runners, Alexandra resident Dave Fearnley said. He made a submission to the Central Otago District Council's long-term council community plan, asking the council to negotiate a formal access agreement with the owners of the private land, to protect recreational access.

"At the moment, everyone relies on the goodwill of the landowners but it would be good to formalise access in some way, maybe by an easement, and then the network could be developed and promoted," Dr Fearnley said.

"It's under-recognised as an attraction in this area, compared to how valuable the amenity is.

"The nature of the terrain, together with favourable climate and ground conditions, give this area potential to develop as a world-class mountain bike recreational reserve."

In Rotorua, the local authority had joined forces with a landowner and mountain bike clubs to develop an extensive trail network in the Whakarewarewa Forest, on the city boundary.

"Mountain bike tourism is estimated to inject $8 million per annum into the Rotorua area," he said.

Although Alexandra had no mountain bike club, Dr Fearnley believed enthusiasts would establish an organisation to help develop the tracks, if agreement was reached about access.

Board member Martin McPherson thought it was a good idea and the board should start the process.

It could have major economic and social benefits for the area, he said.