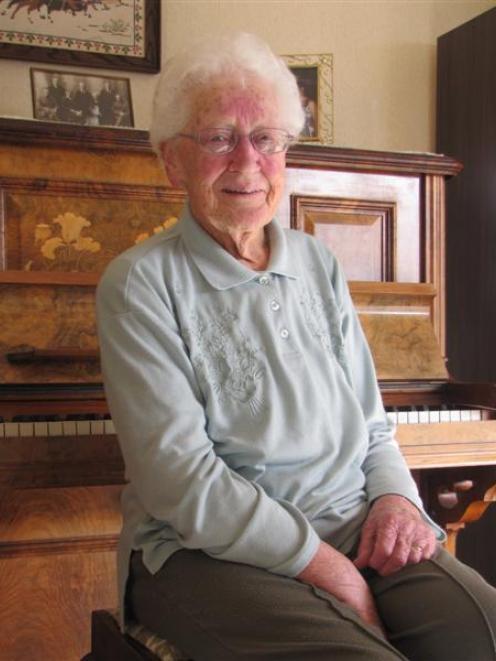 Bettie Lawson is stepping down after being the "backbone" of Roxburgh music for half a century. Photo by Sarah Marquet.
"Backbone", "stalwart" and "committed" are just some of the words used to describe Bettie Lawson, who, after almost half a century on the Roxburgh stage, has stepped out of the limelight.

The lively 84-year-old smiled as she explained her voice was going and she was not too keen on going out at night anymore, but would remain a life member and patron of the Roxburgh Musical Society and the Roxburgh Harmony Group.

Mrs Lawson had been a member of the Roxburgh Musical Society since it started "in 1960, I think".

It was a great way to meet people and make friends in the small town, she said. She had moved to Roxburgh in 1952 after marrying Jack Lawson, who got a job on an orchard.

Mrs Lawson sang mainly in the chorus but initially had a few principal roles, her favourite being Aunt Eller in Rodgers and Hammerstein's first musical collaboration Oklahoma!

She was also a founding member of the Roxburgh Harmony Group - a branch of the musical society set up "about 26 years ago" for "people just wanting a choir".

Mrs Lawson said she had no formal voice training and her parents were not particularly musical, but music "has always been a big part of my life".

She had enjoyed singing and acting since high school and had been a member of church and school choirs.

At the recent Central Otago Awards, where Mrs Lawson won a community services award, the judges described her as "the Mother Teresa of the Teviot Valley", "a woman with courage, strength and heart" and "the glue that holds the community together in times of need".

Roxburgh Musical Society president Rosemary Kelly said Mrs Lawson was "a rock, always guaranteed to be there" and "just one of those good people".