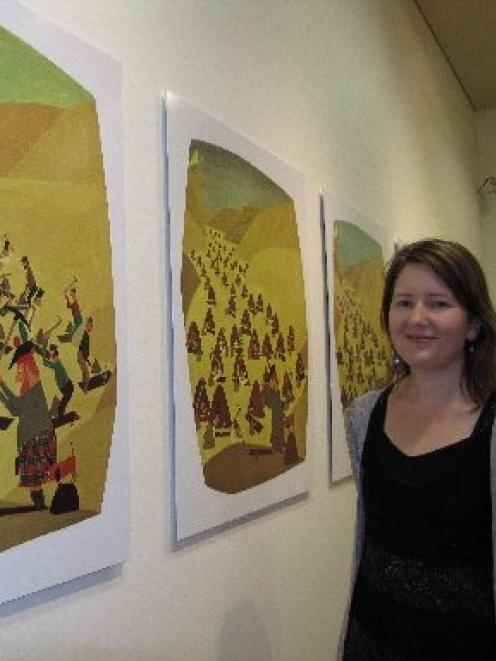 The exhibition was opened last night with drinks, music and speeches by museum board president Malcolm Macpherson and exhibition technician Luke Anthony plus a poem reading by Gillian Grant.

The 28 panels, painted in 1962, were one of Clark's last big works before his death in 1966 and were commissioned by the then proprietor of Dunedin's City Hotel, Stewart Elms.

Mrs Redmile said when Mr Elms moved from Dunedin to Bannockburn he took the panels with him and later asked artist Grahame Sydney to take a look at them.

He suggested the panels should be in a museum.

Mrs Redmile said the panels had suffered considerable damage and were too fragile to exhibit but, as part of the 150th gold celebrations, the Central Lakes Trust had granted money to have them restored.

Local photographer Eric Schusser took photos of each of the panels for Mr Anthony, who then digitally restored the images to remove imperfections caused by deterioration.

"It was about finding a balance of maintaining the integrity [of the images] but making them more viewable," Mrs Redmile said.

The reproductions are about one third smaller than the original panels.

She said a booklet had also been produced which showed all the panels with the poem, a foreword by Sydney and a biography of Clark.

The exhibition will close on May 28.