0 Comments
Clyde has a new red bridge that mimics the historic bridge across the Clutha River.

The new bridge is a main feature of the Clyde River Park playground which is nearing completion.

The playground is part of the Clyde River Park upgrade that includes the Miners Lane extension project — a one-way through road linking to Matau St — and the upgrade of a walkway linking the Clyde heritage precinct with the Clutha River.

In 2019, the Central Otago District Council received $612,500 from the Government’s tourism infrastructure fund towards the upgrade of the Clyde River car park, access, toilet facilities, picnic area and playground .

The toilets are in place, as are electric barbecues, balance beams and much of the play equipment, with the "pour and play" rubber matting installed below the central, red bridge climbing frame last week.

Council parks officer projects Marie Gordon said the concept for the playground was themed around the site’s riverside location and inclusion of Clyde’s iconic bridge was a combined idea from council staff and Creo Play Space Design.

The community was consulted during the process and the children at Clyde School were really excited about the plans, she said. 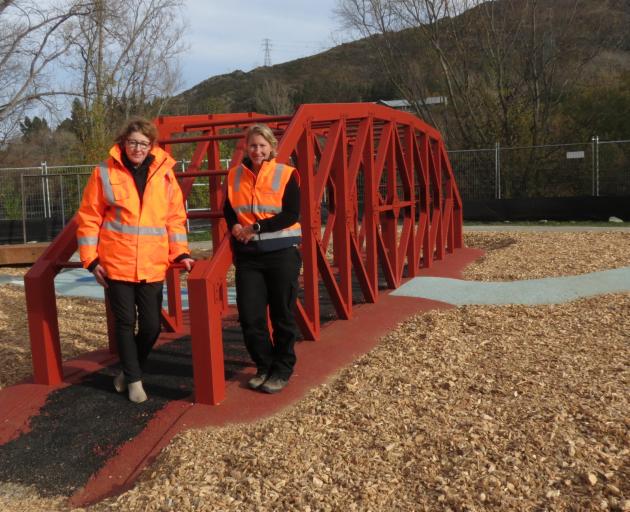 Project manager Adele Eyers was proud of what was visible in the playground , but pointed out a lot not obvious to the casual viewer.

The ground has been raised to avoid "once-in-a-hundred year" floods, raised berms surround the park to prevent children running into the road, stormwater drains under the playground take runoff from the hill behind and large rocks are placed near the road to keep cars well away.

Mrs Eyers said those rocks and others in the playground had been sourced during the wastewater upgrades that were taking place in the town.

Other reused materials were railway sleepers from an old bridge in Roxburgh, now used as balance beams and to mark off the swing area, and timber posts left over from a retaining wall beside Miners Lane.

The playground was expected to be completed and opened by the end of June, Ms Gordon said.