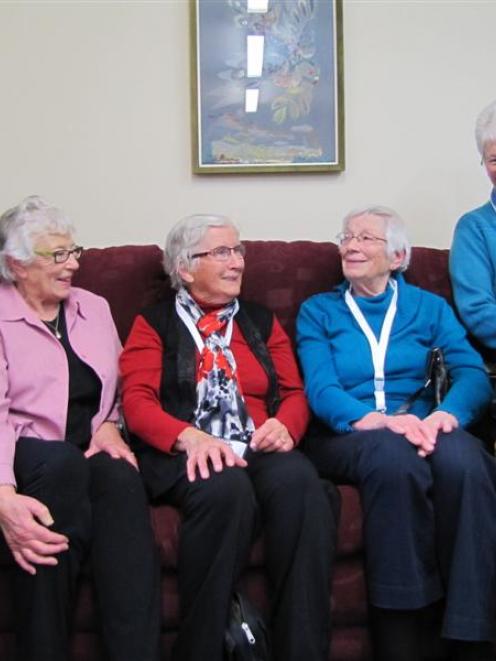 Former Dunstan Hospital nurses Jenny Saunders, of Dunedin, Helen Love, Rae Rowe, Beryl Smith and Jenny O'Brien, of Alexandra, and Doreen Broadley, of Cromwell, reminisce during its 150th celebrations about their time at the hospital. Photo by Sarah Marquet.
Getting the chance to reminisce about Dunstan Hospital as it once was drew about 100 people from throughout the country to Clyde at the weekend.

''It's not like it was ... your underwear used to get black just crossing from the nurses room to the hospital [because] of the frost pots,'' former hospital matron Beryl Smith, of Alexandra, said.

''And when you blew your nose, it was black,'' former nurse Jenny Saunders, of Dunedin, recalled.

The hospital was quite different and a lot more modern than the women remembered it, but for many of the former nurses, it was the comradeship that for them had been the most enduring memory from working at Dunstan Hospital.

Former nurse and midwife Jenny O'Brien, of Alexandra, worked at the hospital for about 20 years before leaving to set up Charlotte Jean Maternity Hospital in Alexandra.

She was just one of the former nurses who said the best part about working at Dunstan Hospital was the comradeship, because it made working there ''a lot of fun''.

''All the domestic, kitchen and nursing staff all respected each other and we had a lot of fun.''

''It has been good to see so many old faces. We haven't changed that much, just a few more grey hairs,'' Ms Saunders said.

The weekend's festivities were officially opened by Mayor Tony Lepper on Friday night. That was followed by formal photos, afternoon tea, the official opening of the CT scanner and a formal dinner on Saturday night with Southern District Health Board member Richard Thomson as guest speaker.

Mrs Webb said Mr Thomson was ''an inspired choice'' and his speech had ''just the right mix of humour and seriousness''. He was chosen because of his links with Dunstan Hospital - he was chairman of the Otago District Health Board when the hospital was rebuilt and reopened about eight years ago.

Two awards were given out at the dinner - one to Bev Clark, of Wanaka, who was chairwoman of Central Otago Health Services Ltd during the time the hospital was redeveloped and the other to Dr Gary Nixon, ''for much the same reason'', Mrs Webb said.

To finish the weekend of festivities, there was a service of remembrance at the hospital yesterday followed by the planting of a ginkgo biloba tree on hospital grounds.

''It's an ancient Chinese tree which ties in the fact that one of the first wards at the hospital was a Chinese ward and that parts of the tree are still used in medicine,'' Mrs Webb said.