Painting rewards he who waits 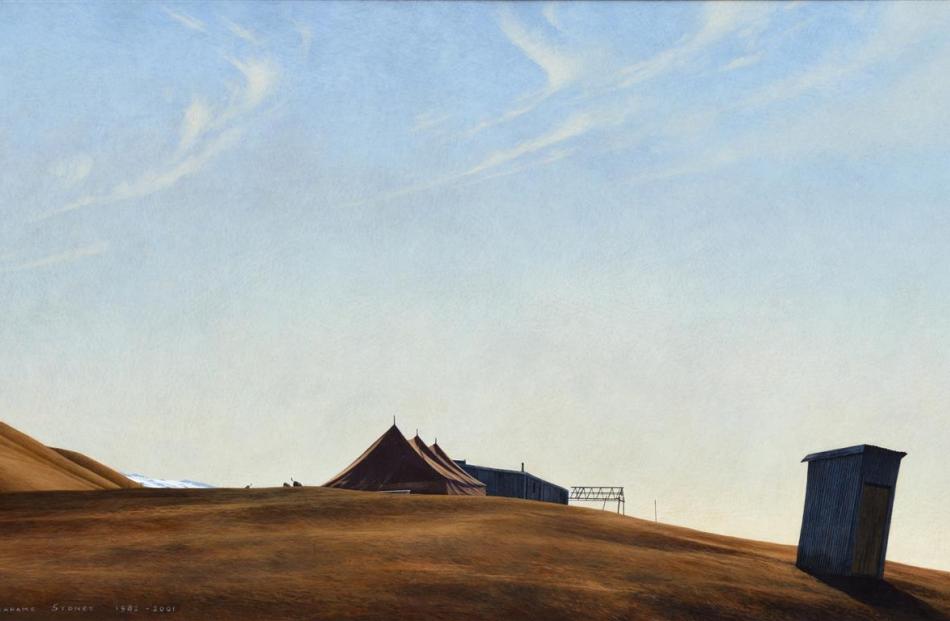 Grahame Sydney paintings rarely come on the market but this landscape titled Dog Champs at Charlie's Bar will be auctioned next week. Photo by Paul Nathan.

A Grahame Sydney painting delivered 19 years after it was commissioned is expected to reward its owner's patience by fetching more than $100,000 when it goes under the auctioneer's hammer next week.

Director Simon Bowerbank said demand for Sydney's work was high and it was rare for any of his paintings to come on the market.

The last of Sydney's landscape paintings to be auctioned fetched $145,000, he said.

The owner of the work being auctioned on Wednesday commissioned it after meeting Sydney at his studio, then at Mt Pisa, in 1982. He paid for it then but waited 19 years "sending him letters and emails over the years and being repeatedly told by the artist he wasn't doing egg tempera work at that time'' before the work was completed and delivered in 2001, Mr Bowerbank said.

The owner received the painting in time for his 60th birthday.

"When the painting finally arrived, it was accompanied by a card from the artist wishing the owner happy birthday. In it, Sydney also wrote: 'As it says in the Mainland cheese ad, 'good things take time' so this must be bloody good','' Mr Bowerbank said.

Contacted about the work, Sydney said although he could not remember all the details, he recalled the man who bought the painting and said the birthday message "sounds like me''.

The painting was based on a watercolour he had painted of the Lowburn dog trial grounds hosting the national championships, before the site was flooded when Lake Dunstan was filled.

"I remember this guy was desperately keen to get an egg tempera painting from me, but I'd stopped doing them. We were moving from Mt Pisa as my eldest child was coming up to school age and I felt we should go to Dunedin. I probably did take the money for the commission then because we needed it to move.

"Eventually my conscience kicked in and I produced the painting, delivering on the promise.''

He has now been working as a full-time artist for 42 years and no longer takes commissions.

"I've got a very nice long list of people who have indicated they'd love to own something of mine and when I finish a painting, someone will get a phone call from me. Being on the list is not a guarantee.

"I don't do that many paintings, I'm a slow and patient worker and in a good year, I'd be lucky to get six done.''

In an unusual move, the artist, as well as the painting owner, will reap a monetary reward from the sale.

Bowerbank Ninow has opted to pay a royalty to living artists whose works are re-sold privately or at auction through the firm. The artists receive 2.5% of the sale price, which is funded by the firm's commission, Mr Bowerbank said.

"It's something we believe in and we're profiting from the sale so we like to give something back.''

Sydney said he appreciated the gesture.