Photographer showing things as they are in Central Otago 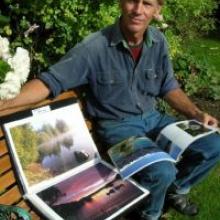 Photographer Barrie Wills looks through previous collections of his work. Photo by Rosie Manins.
One of Alexandra's candidates for the Vincent Community Board by-election this year is taking a look at the Central Otago district from the inside.

Barrie Wills (56), has spent the past couple of years selecting from his library of about 15,000 photographs of the district, for inclusion in the first written showcase of his recreational passion for photography.

The book, Central Otago: A View From The Interior, was due on the shelves within a month, after Mr Wills received the first hard copy from publishers last week.

He said the book comprised the best of his work, about 130 photographs depicting landscapes, panoramas, people, wildlife, and textures within the vast areas of the district.

‘‘A lot of it is being in the right place at the right time. I work in the rural field a lot and get many opportunities to do the landscape work,'' he said.

Mr Wills was schooled in botany and worked for various organisations and groups on scientific and environmental matters.

Upon moving to Alexandra from Christchurch with his wife in the late 1970s, Mr Wills joined the local photographic society, and a love of viewing the district through a lens had lasted ever since.

Mr Wills said the district's light, hills, panoramas and vistas were an inspiring subject with which to work.

‘‘I've never been one for manipulating my photographs. Some people spend hours perfecting their images on photoshop and other computer programmes, but I prefer to show the landscape as I see it,'' he said.