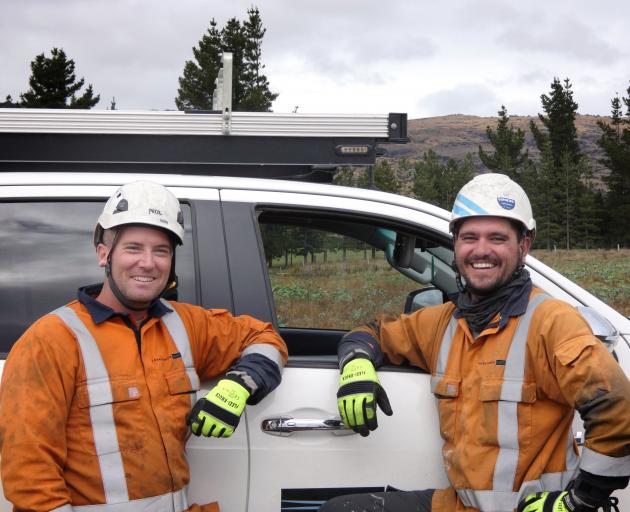 Electrix transmission and distribution line mechanics Scott Mulcahy (left) and Sean ‘‘Stewie’’ Stewart on site in the Ida Valley. PHOTOS: JARED MORGAN
A high wire act is unfolding high above the Ida Valley as work to rewire the national grid from Roxburgh in Central Otago to Livingstone in the Waitaki district continues.

The work is being undertaken by about 70 transmission and distribution line mechanics from across New Zealand (the majority from Palmerston North) from Electrix who provide the grunt behind the extra juice.

Distribution line mechanic Zander Whitman said that along with with line duties, he was based at a tensioner site — a mobile base where the new lines were tensioned between towers (pylons).

The work involved one phase per day, going from one to two lines, for a total of three phases, or six wires.

The sites remained in place for three to four days before moving up the line, giving Mr Whitman time to take in Central Otago’s scenery, he said.

"I’m falling in love with this [landscape] now. I want to bring my wife to see it."

Also at the site was mechanic supervisor Damian Durban, who said it was his second time in the South Island.

He had worked on a similar lines project between from Ashburton to Oamaru — it was in Canterbury that he encountered snow for the first time.

Down the line towards Poolburn, a team of four transmission and distribution line mechanics were engaged in the acrobatic work of removing the blocks — large reels the lines are rolled through — to attach the lines to the insulators.

Flynn Wild said in his two years on the job, the skill of walking on wire had become second nature.

Crewmate Marbert Nero said on a good day, communication between himself and the ground was easy; wind made it difficult and sometimes they had to resort to hand signals.

"In the wind they can’t hear a thing from us on the ground."

Transpower CUWLP project director Roy Noble said work was under way in the northern end of Ida Valley near Oturehua, and work was expect to be completed from there to Naseby by early May.

Then, the workers would head back to the Poolburn area to complete a 10km section before disestablishing for winter, he said.

In early October, Transpower would return to complete a 12km section between Earnscleugh and Galloway Rd through the Alexandra area.

That work was expected to be completed by the end of November.

In January 2022, work would begin on the Naseby-Danseys Pass-Livingstone section, and the intention was to complete this section by the end of April, Mr Noble said.