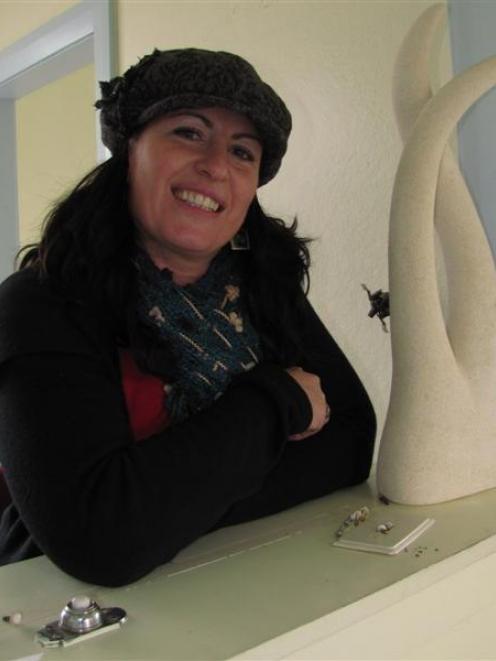 Former Project Maniototo co-ordinator Amie Pont in what will be her shop once it has been renovated. Photo by Sarah Marquet.
The four-year, government-funded Project Maniototo has come to an end but its legacy will live on, former project co-ordinator Amie Pont says. Sarah Marquet caught up with Mrs Pont and former project chairwoman Diane Paterson about that legacy.

Servicing the needs of a community as diverse as Maniototo - a vast rural area encompassing at least 10 subcommunities - was always going to be a challenge.

Looking back at their roles, former Project Maniototo co-ordinator Amie Pont and chairwoman Diane Paterson say their positions changed tack and evolved to meet that challenge over the four years the project ran.

The project began in 2009 after the community was approached by representatives of the Department of Internal Affairs, who were on the lookout for communities that would benefit from a boost such as this, Mrs Pont said.

Actually, the community had been previously approached by the department but felt it was not ready for such an initiative.

However, in 2009, with Central Otago Reap on board and able to administer the $80,000-per-year fund, it was all go for the project. Ms Paterson was elected as chairwoman and Mrs Pont was employed as co-ordinator.

Their path was already set for them by community planning groups that had come up with a series of ideas but did not have the time or ability to action them.

Heritage, for example, was something important to all areas of Maniototo - from the Art Deco heritage of Ranfurly to the gold mining history of Naseby and everything in between.

Now, each community within Maniototo has a historical story to tell and the interpretation panels to display it. The areas are also linked by a Heritage Trail, providing something extra for tourists and visitors to do and therefore keep them in the area for that bit longer.

A collaboration with the University of Otago also helped the town of Ranfurly better promote and protect its Art Deco heritage.

Developing a marketing strategy and the material to promote the area was another key part of the project.

''As a small community, you have to have a profile. We want people to know we exist, to visit and to live here,'' Ms Paterson said.

Not only does the area have a tourism website, for the past four years it has been actively marketed to people in towns such as Dunedin.

One of the biggest legacies the project has left for the community is a communications hub.

''It took a number of years into this project before we really understood the challenge of communicating within a large, geographically spread area.

"As a result, we needed to prioritise communication as a key issue and work towards establishing a range of sustainable methods to ensure communication channels would continually improve,'' Mrs Pont said.

The community-run radio station Burn was already and is still operating from Ranfurly but is being expanded to include a new website, maniototo2day, and the local news bulletin, Positively Maniototo.

Mrs Pont said it was a fantastic legacy for Project Maniototo to leave - somewhere all locals could access Maniototo-specific information in whatever medium they preferred.

The communications legacy was tested and ''fully verified'' recently when the ''big snow'' hit.

The station was able to co-ordinate communications and worked with Rural Women New Zealand which ran a food drive to feed the farmers and volunteers digging out stock.

''Burn has moved from a basic community station to a necessary community communications hub fully supported by the Maniototo people.''

She said she was also proud it was community-run rather than a business venture.

For both women, the end of the project has provided an opportunity to move on with other aspects of their lives.

Ms Paterson, who with husband Errol Millar runs Hawkdun Lodge, is looking forward to focusing on that more, as well as devoting more time to the Art Deco Gallery.

''I'm looking forward to spending a bit more time on a few less things,'' she said.

Mrs Pont, too, is focusing on business. Along with husband Jeff, she is renovating her father's old dentist clinic and turning it into a shop.

• Heritage: Stories and history of areas within the Maniototo have been recorded and, in most cases, presented in interpretation panels in those towns which are now linked by the Heritage Trail.

• Tourism: The Otago Central Rail Trail created many opportunities for local businesses to tap into tourist dollars. Project Maniototo helped those businesses and also developed a marketing strategy for the area to help bring in more tourists.

• Events: Before Project Maniototo, there were issues with events clashing and some not being as successful as they could. Now, there is an events calendar and a template for people to follow when putting on events.

There are also a lot fewer events but those that remain are bigger, providing opportunities for community groups to get involved.

Some events instigated or run by the project include the Bards, Ballads and Bulldust Festival, a Jazz and Jocks weekend of music and rugby in collaboration with Cromwell during the Rugby World Cup, and the Burn Maniototo Community Cup.

• Supporting volunteers: Many things in Maniototo are done by volunteers and a function of Project Maniototo was to help those people understand who to apply to for money and how to go about filling out the necessary forms.

• Skills database: The community now has a database of more than 1000 people and their skills or areas of interest.

• Communication: With a small and somewhat fragmented community, it can be hard to feel as though you are a part of the bigger picture, Project Maniototo chairwoman Diane Paterson says.

That was why communication was a major focus.

Now the community-run radio station Burn has become a communications hub. Maniototo now has its own print, radio and online media.