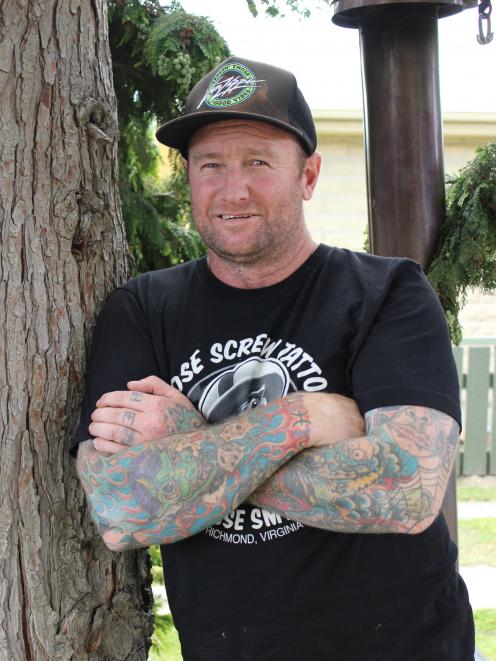 Regan Healey returned home yesterday after a trip to Auckland and New Plymouth with his partner and a friend, to attend the New Zealand Tattoo and Art Festival.

They were eating at a restaurant in the Auckland suburb of Burswood when Mr Healey said he noticed a mother ''really panicking''.

"There were a lot of people with a boy choking and about to pass out. Before I knew it, I was in the middle of it.''

He performed a Heimlich manoeuvre on Lucas Hancy (9), who was choking on a "long piece of steak'', Mr Healey said.

"It was stuck in his throat and he couldn't breathe.

"I got that out - along with everything else he'd been eating,'' Mr Healey said.

He knew first aid from his work as a lineman, and from the five years he was in the Alexandra Fire Brigade.

"I've had to do it a few times before, but never for something this serious. I was worried that he'd broken a rib or something, but he seemed to be OK.''

Afterwards, members of the boy's family came up and thanked him, he said.

The following day the family eventually found him on social media.

Lucas was at the restaurant with his family celebrating his sister's 12th birthday.

His mother, Danielle Hancy, said she was walking from the table with her son to get some food and noticed something was wrong when he was staring at a bush instead of the pancakes.

"I was patting him on the back to get it out, which I know is the wrong thing to do.

"Then this guy just took over. It all happened so fast. I didn't even know what was happening.''

Lucas was fine now, but was "pretty shaken up'' at the time, she said.

"He hugged me for, like, 10 minutes straight. He's usually way too cool for that.''

Afterwards, Lucas told her he saw the light, "but instead decided he would walk the other way''.