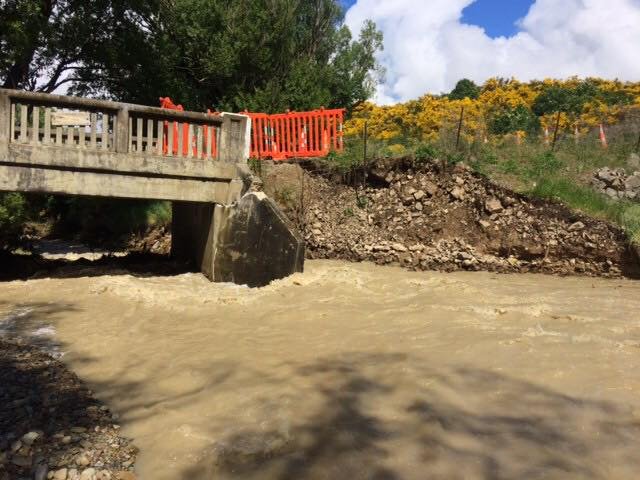 About $350,000 will be spent replacing Bridge 94, which crosses Station Creek on the St Bathans Loop Rd and is seen here during last month's flooding. PHOTO: CENTRAL OTAGO DISTRICT COUNCIL
The repair bill for last month's flooding in Central Otago will be more than $500,000 and almost as much again will be spent on a replacement bridge needed because of flooding last year.

Central Otago District Council infrastructure services manager Julie Muir said the council was still assessing the cost of repairs to infrastructure from the November flooding but it would probably be between $500,000 and $800,000.

This did not include the $350,000 cost of replacing the bridge on St Bathans Loop Rd, which was damaged in July 2017 flooding and further damaged in last month's flooding.

Work on the new bridge would take place from January to April next year, and a temporary detour would be put in place during that time, she said.

Ms Muir said most roads in Central Otago had been assessed.

Once the assessments had been completed, applications would be made to the NZ Transport Agency for assistance with funding the repair work, Ms Muir said.

CODC would pay for the balance of the work.

Ms Muir said despite the Omakau bridge being closed to traffic during the flooding, that bridge had not been damaged. Debris was removed from the piers throughout the flooding to keep waterways clear and prevent buildup.

The last road in Central Otago to have remained closed following the flooding, Auripo Rd, is now open, and Roxburgh's Jedburgh St Bridge is now open to all traffic, although there is a 20kmh speed restriction in place.

When asked about feedback from residents and if people had been happy with the level of service from council and council contractors, Ms Muir said "to date there have not been any issues that have not been resolved by positive communication by either the council or the main contractor.

"Central people are very resilient and help each other''.