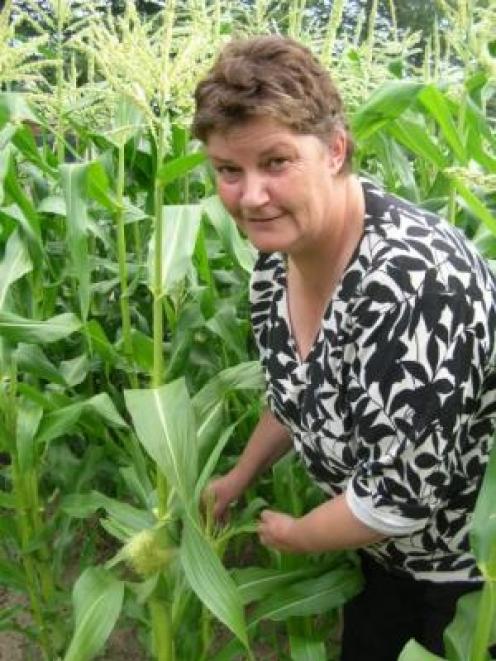 Garden of Eden . . . Alexandra Salvation Army community ministries co-ordinator Gywnneth Butler is eager for the organisation to grow more vegetables in its new plot named Eden, after the harvesting of existing vegetables grown in a patch nearby takes place in April. Photo by Rosie Manins.
The rising cost of living is generating an increased demand for Salvation Army services in Alexandra.

With more than 400 people registered on the town's Salvation Army client database, the organisation is looking for new ways to cater for residents and transient community members in need.

A 5000sqm vegetable garden, named Eden, sprang from a member's idea and grew with the support of the community.

‘‘The price of vegetables is huge and it's not getting any easier for people to afford them . . . in reality not many can afford 5+ a day,'' she said.

Ms Butler's vision of a Salvation Army vegetable garden for the community's use started on a small scale in the back yard of a local resident's property.

‘‘It was just about meeting the need in our community, and the need is growing,'' she said.

A retired Roxburgh farmer named Rob put his green fingers to use and developed most of the garden, with the help of contributions from community groups, businesses, and individuals donating tools, equipment, plants, and manpower.

The vegetables from ‘‘Rob's Garden'' went fresh into weekly food parcels during the summer season, and were also blanched, then frozen for distribution throughout winter.

‘‘It's important they are pleasant to the eye, taste good, are healthy, and are prepared and cooked in a way that meets good health and hygiene standards,'' she said.

Ms Butler said after an initial eight-week trial of a vegetable coupon system, the idea had flourished, and every Friday morning people went to the organisation headquarters on Royal Tce to exchange coupons for a weekly supply of produce.

‘‘We are keeping really good statistical information so we don't over or under-produce with the garden. It is about matching the needs of the community,'' she said.

Vegetables were harvested three times a week. At the end of produce season in April, Rob's Garden would be cleared out and given back to the property owner for personal use.

By then Eden just a few hundred metres down the road, would be ready for planting and the new season of Salvation Army vegetables would begin.

A part-time garden manager had been appointed by the organisation to oversee work on the new vegetable patch, which was situated on land owned by the central Otago District Council, off Dunstan Rd in Alexandra, which the Salvation Army was able to occupy for the next five years before the lease was reviewed.