Seasonal horticultural workers showed off their culinary skills and new-found confidence in the kitchen on Sunday night.

Vakameasina, which translates to "treasures we carry together", is an education and development programme for recognised seasonal employer (RSE) workers, funded by the Ministry of Foreign Affairs and Trade (Mfat) under the New Zealand Aid Programme.

The students served up Pacific-inspired dishes — penema poached fish and tafea coconut beef — and non-alcoholic drinks, all prepared by themselves.

It was no mean feat, considering their starting point, Mrs Pye said.

"The first few lessons, even to read a recipe was hard for a lot of them — working out what a cup was, teaspoon versus a tablespoon — all those basic things we might take for granted, till tonight ... I just brought along recipes and I said "you do this, you do that"." 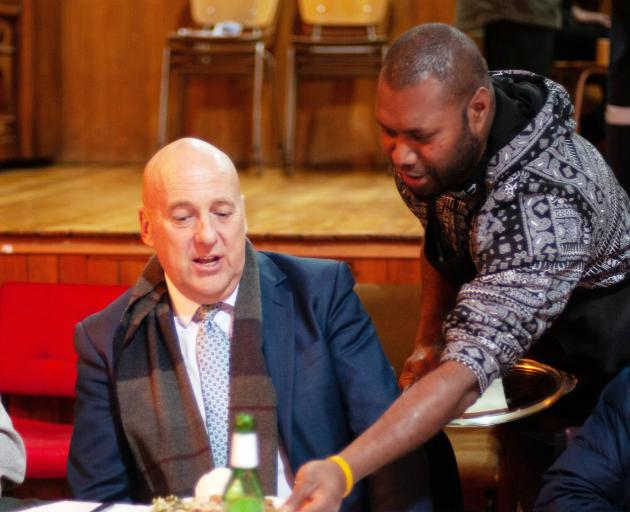 RSE worker Brucio ‘‘Boris’’ Asaor serves Central Otago Mayor Tim Cadogan at the Vakameasina Cookery and Hospitality course graduation meal on Sunday night. PHOTO: SHANNON THOMSON
It was intimidating for them to be serving 16 guests, including their bosses and Central Otago District Mayor Tim Cadogan, but they stepped up to the challenge, she said.

"They were intimidated. I was too, so for them to have stepped up and do that, get past the fear and do it anyway, get past the fright, they’ve done amazingly well. I’m so proud of them all."

Dunstan Hills orchard worker Lory Thompson has been part of the RSE scheme since it began in 2007.

He had completed several Vakameasina courses and said the cookery training had broadened his usual diet of cassava, yam, taro and rice and provided cost-effective options.

"Now I’ve got confidence just to look at the recipe and go straight into it ’cause I practised myself — this few days on the course, that’s what made me confident."

Mr Thomson said he felt every RSE worker should take up Vakameasina classes to support them while they were in New Zealand.