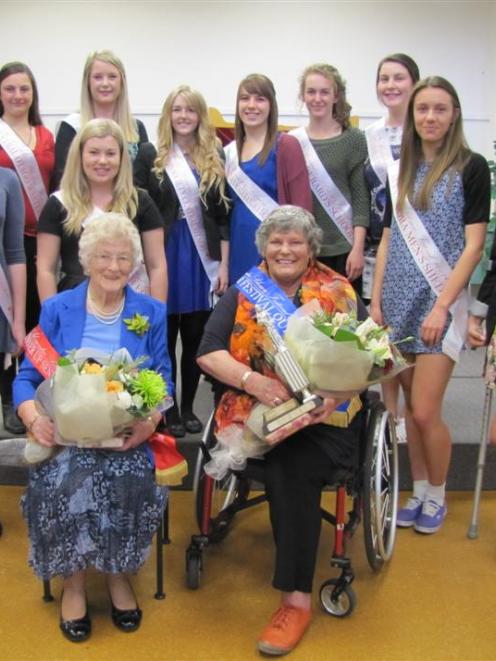 The festival princesses and Alexandra Festival Senior Queen (front right), and runner up. Photo by Sarah Marquet.
For an uncountable number of years, Judy Elliot-Hall has bullied and arm-twisted many people into being a part of the Alexandra Blossom Festival.

This year, she was on the receiving end of it.

While the crowd was entertained by singing, dancing and a fashion show, judges Kathy Smith, Esther McKay and Terry Monaghan reached their decision.

Ms Elliot-Hall has lived in Alexandra since moving up from Dunedin when she was 12 years old and said the Blossom Festival was one of the reasons she still lived there - as well as the weather and friendly people.

She had been on the festival committee several times and confessed to being a bit of a bully, ''but a good one'', when it came to getting people to put their names down to be a princess or senior queen contender.

She said her win was ''absolutely wonderful'' but quite unexpected.

''I only entered to make up the numbers, really.''

The event marked the official beginning of the Blossom Festival and was the first official public appearance of the 10 festival princesses.