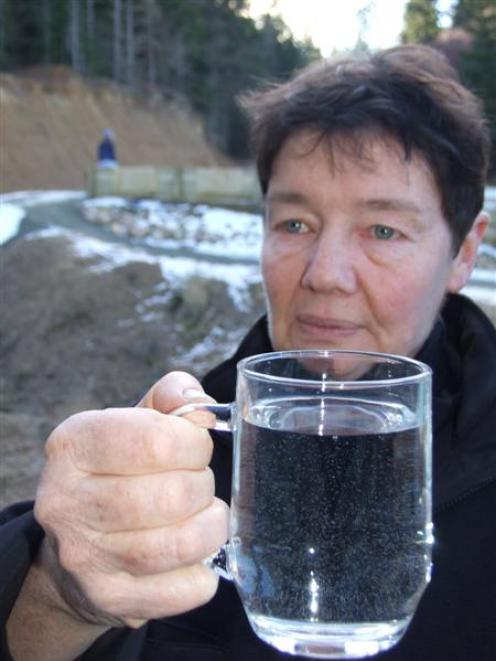 Water-metering took effect from the start of this month for some Central Otago district ratepayers and the owners of commercial and large residential sections (more than 1100sq m) in Naseby, Omakau, Ophir, Ranfurly, Clyde, Cromwell and Alexandra will be the first to face charges for excess water used.

Under water-metering, commercial and residential section owners on town supplies throughout the district will be given a yearly allocation of "free water" and charged by the cubic metre for water they use above that allocation.

The allocations and excess water charges vary from town to town and Naseby residents have been given the equivalent of 460 litres of free water a day.

Clyde residents have been allocated 2052 litres a day, Alexandra 1687 litres and Cromwell 879 litres.

"I can accept there is a need to conserve water but I don't think this is the way to go about it," Mrs Swinbourn said.

"Feelings are running high about it. Some consultation with the community would have been good."

Meters will be installed on residential sections less than 1100sq m throughout Central Otago within the next year or two and the allocations and excess water charges will be phased in for all town water users.

The amount of free water is the same for commercial and domestic users within a water scheme.

Central Otago District Council utility service manager Peter Greenwood said there were plans to review the allocation and charges for Naseby, because of the residents' concerns.

Water-metering had been introduced district-wide because of the area's low rainfall and metering was recommended as the best way to conserve water.

The council had tried to reduce peak water use in towns using a mix of education and water restrictions, but that had not reduced the demand for water.

It had to upgrade drinking water, cater to the desire of the community for softer water (in Cromwell and Alexandra), sustain a limited and precious resource, particularly in the Maniototo, and be able to afford to grant consents for water takes in the future, Mr Greenwood said.

The calculations for each town's allocation and excess water charges were based on the characteristics of each scheme, and reflected total production and operating costs, and the number of connections.

The Ancient Briton Hotel was nearly halfway to its yearly total of free water less than a week after metering took effect, manager Patty Robinson said when approached by the Otago Daily Times.

"I've been checking the meter all the time and it won't take long before we use our yearly allocation, and then we'll face the excess water charges," Mrs Robinson said.

"Our hotel can sleep up to 40 and we have a 50-seat restaurant, so you'd think hospitality-based businesses would have a different allocation than residential water users."

If the hotel had to pass the charges on to its consumers, people would not be able to afford to stay in Naseby, she said.

"It'll be more expensive than staying in Queenstown."

Naseby Vision deputy chairman Stuart Hore said the amount of free water allocated to Naseby residents was inadequate and could threaten the viability of commercial businesses.

"Naseby can ill afford to lose any business; rather they should be given every possible incentive," Mr Hore said.

Naseby Vision has a membership of 250 people and acts as an advocate on behalf of the town's residents.

The township had a high proportion of holiday-home owners, and only about 15% of ratepayers were permanent residents, he said.