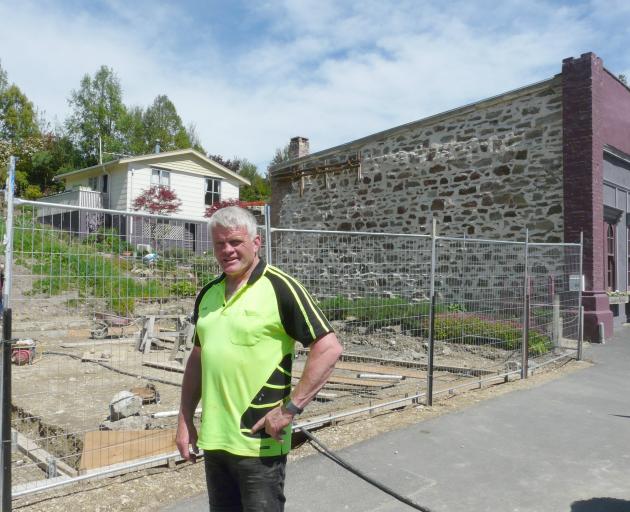 David Latta Builders, of Balclutha, began work on a new "commercial building" on the site last month, and Mrs Walker quickly became concerned about its possible effects on the town's gold rush heritage streetscape, dating to the 1860s.

When she obtained the building plans from Clutha District Council, she said she was "shocked" at its "disrespectful" design.

"It's a shed, basically.

"Lawrence is one of Otago's earliest and most significant heritage towns, and here we have a building going up whose street appeal is arguably zero.

"Not only is its design disrespectful of adjoining historic buildings, but also its location, right opposite the entrance to Gabriels Gully.

Project manager David Latta, overseeing the project for site owner Don Conway, of Wyndham, said the designs had been "misconstrued".

"I think [Mrs Walker] has gained a mistaken impression from the basic building plans.

"We're not doing anything different here from several of the buildings on Ross Pl, which are essentially sheds with a shop frontage."

Mr Conway confirmed this was the case, saying he hoped to "enhance" Lawrence's streetscape with his new enterprise, although he would not reveal its purpose.

"We've an established history of similar award-winning businesses across the South, and are looking forward to placing a considerable investment in Lawrence.

"We've always planned for a frontage in keeping with the historic streetscape here, and have already made several compromises in building design to comply with regulations.

"Unfortunately this is the only place the building can go [to comply with zoning]."

A public meeting regarding the project, hosted by Mrs Walker, will be held at 6pm on Friday, at the Elim Church Hall.

The Tuapeka Christian Centre Building (according to Google Street View) is much more of an eyesore than this new one would likely be. Used to be a petrol station back in the day.

A 'facade' is the correct term, and thousands of shop premises right through NZ and indeed the world, have them, and always have. Even in the 1800's all our shops were essentially sheds with a 'fasade'. Back in pioneering times, business did't spend money on unnessary things. Maybe an artists impression forwarded to the concerned citizens of Lawrence would possibly allay any fears of the new project being just a shed? Plans on paper are easily misconstrude by those who may not interpret them as intended.