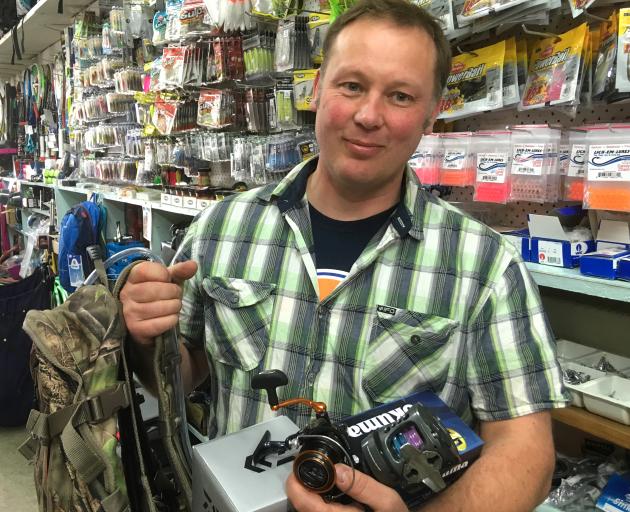 Stuart Middendorf reclaimed $900 worth of items after chasing down the man who allegedly stole them from his store, Central Otago Sports Depot, in Alexandra on Friday. PHOTO: ALEXIA JOHNSTON
An alleged thief got more than he bargained for when a quick-thinking shop owner chased him along Alexandra's Tarbert St to reclaim $900 worth of goods.

When Central Otago Sports Depot co-owner Stuart Middendorf realised a man had allegedly taken items from his shop on Friday he gave chase.

Mr Middendorf said the man was chatty, giving the impression he was there to buy something as he browsed the store.

"You couldn't get a friendlier guy.''

Police confirmed they were investigating the incident and "inquiries are ongoing''.

Mr Middendorf said he had reviewed CCTV footage which showed the man allegedly filling a stolen backpack with items.

He left the bag while he grabbed at least four fishing reels valued at between $190-$200 each, which he placed in the bag.

Customers were coming and going at the time, she said.

However, the alleged thief's casual exit from the store was noticed by Mr Middendorf who chased him a short distance along Tarbert St.

When Mr Middendorf caught up with him, the man made a range of "excuses''.

Mr Middendorf took the bag off him, which still contained the fishing reels, complete with labels from the Central Otago Sports Depot.

"He had all the moves. He knew what he was doing,'' Mr Middendorf said.

He reported the incident to police via the 105 service and warned other hunting and fishing stores of the alleged offence.