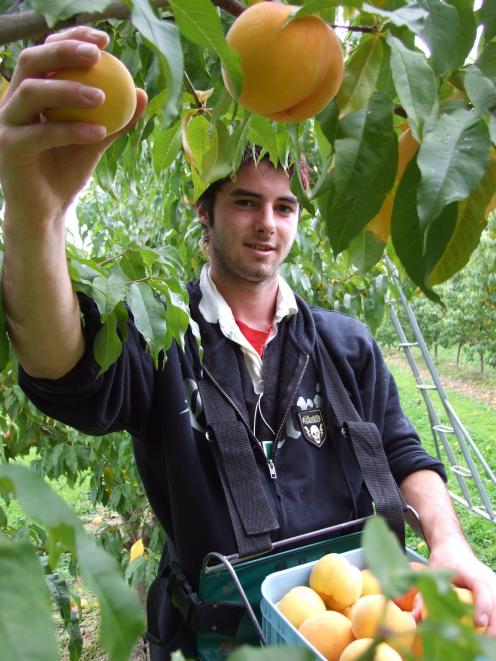 Fruitgrowers in Central Otago report an increase in the number of fruit pickers looking for work this year. Oliver O'Shea, of Invercargill, picks late-season peaches at Harry Roberts' Earnscleugh orchard this week. Photo by Lynda Van Kempen.
Central Otago orchardists are smiling after enjoying a good season with sufficient staff to get the crops off the trees, in stark contrast to last year's "disaster".

The stonefruit season was almost finished, with the last nectarines, peaches and plums still being harvested, and growers were much happier than last year, Summerfruit New Zealand chairman Gary Bennetts, of Roxburgh, said.

"As far as staffing goes, this year has been fantastic," he said.

"Last year was a disaster. This season, there seems to have been more people about looking for work, especially students, and that just makes life so much easier and orchardists much happier.

"I'm not sure what the difference was this season. Maybe the lower New Zealand dollar was the attraction for travellers."

This year, he and a neighbouring orchardist employed 130 staff between them, picking and packing fruit.

"Last season, I lost fruit because we couldn't get people to get it off the trees, " Mr Bennetts said.

The weather had been brilliant for most of this season and although the volume of apricots was down, there were more cherries than last year.

The only slightly sour note was that prices for fruit were down, on both the domestic and export markets.

"We need to work at orchardists getting a bit more for their fruit," he said.

Orchardist Harry Roberts, of Earnscleugh, agreed there seemed to be more students looking for seasonal work this year.

They were also seeking shorter stints of work.

"They might want to stay only two weeks to fill their pockets again, but that worked OK because it was at the peak of the season when we could use a few more people."

His orchard had a website and sourced staff through it.

He employed about 100 pickers and packers at the height of the season.

Grower-owned co-operative Seasonal Solutions, in Alexandra, has placed about 1000 people in Central Otago jobs so far this season.

Manager Craig Howard said about 80% were from overseas.

Those figures excluded the 240 Vanuatuans who were working on orchards and vineyards in the district.

The co-operative dealt with about 75%-80% of the grape growers and orchardists in the area, he believed.

He agreed there was sufficient staff to meet the demands during the stonefruit and pipfruit season and thought there would also be enough to harvest grapes, when the main crop ripened in a few weeks.

"It was a whole lot easier to find fruitpickers than last year and I think we'll have more than adequate numbers when the grape harvest starts," Mr Howard said.