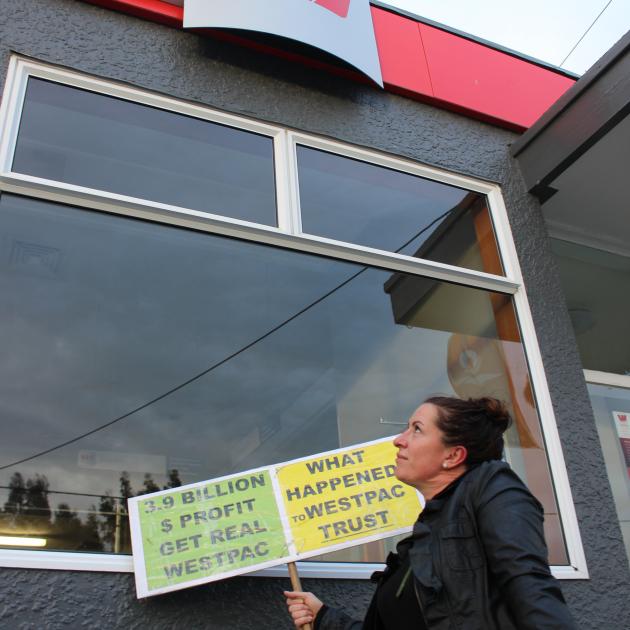 Maniototo Business Group head and businesswoman Amie Pont outside the Ranfurly bank yesterday with one of the placards left over from the protest last month. Photo by Nicole Sharp. 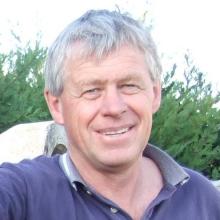 Tony Lepper
Maniototo residents received the news they were dreading yesterday: confirmation the area's only bank will close on November 2.

Community leaders said they were ''gutted'' by the decision and many residents who rallied last month to protest against the plans said they would change banks.

Westpac confirmed 19 branches, including Ranfurly, the Gardens, in North Dunedin, and Te Anau would close. A First Union spokeswoman said the closures would affect between 60 and 70 staff, including two in Ranfurly and three at the Gardens branch.

After the Ranfurly branch closes, Maniototo residents will face a 180km round trip to the nearest bank, in Alexandra.

Businesswoman Amie Pont said the loss was ''gutting'' for the bank staff, their families and the wider community.

''I think it's sad. It makes you wonder if the decision was always cast in stone. We put so much work and effort into protesting. We're not the kind of community that was going to sit back and do nothing.''

A lot of people had told her they would now be changing banks.

'' ... we don't owe them any loyalty so we'll be shopping around, so there will be repercussions ...

''I know the bank says there's been a change in the way people bank, with more focus on online banking, but those changes don't happen as fast in rural New Zealand.''

Central Otago Mayor Tony Lepper said the bank closing was ''just another kick in the guts and makes it harder to live in rural New Zealand.''

Mr Lepper said the community did its best ''but it appeared obvious from the beginning that they'd made up their mind.''

The district council was among those who made submissions to retain the bank. He requested a meeting with bank management last month, which was turned down.

However, now the bank wanted to meet him in the next couple of days to talk about other banking solutions for the area. He believed an ATM and deposit boxes would form part of that, along with educators to help with digital banking.

Stuart Hore (77), of Naseby, said five generations of his family banked with Westpac and its predecessors.

He believed the residents' protests and submissions fell on deaf ears.

''They weren't listening to us ... I think we'll vote with our feet, show our complete displeasure with Westpac by changing banks,'' he said.

An ATM was no replacement for a bank: ''for one thing, I do lots of fundraising for things, and I need change. I don't think an ATM will dish out coins''.

''Businesses will end up having to carry more cash and security will become an issue. I feel very sorry for people in business here.''

Maniototo Community Board chairman Mark Harris said it was a ''poor call'' by the bank and he felt sorry for the staff.

Customers wanted interaction with bank staff and not everyone was computer-savvy.

A statement from the bank said Westpac acknowledged the quality of submissions and feedback it received from staff and communities about the closures. The content would help shape ''customer leave-behind solutions''.

The way customers banked was rapidly changing and more than 85% of service transactions did not take place within a bank.

Branches would close in early November and supporting customers through the change was a priority.

As well as other banking solutions, including digital devices for community use and upgraded ATM and deposit facilities, the bank would have educators give internet banking instruction to customers in their own communities, the statement said.

First Union national organiser Tali Williams said the closures were devastating and she was surprised at the scale of them.