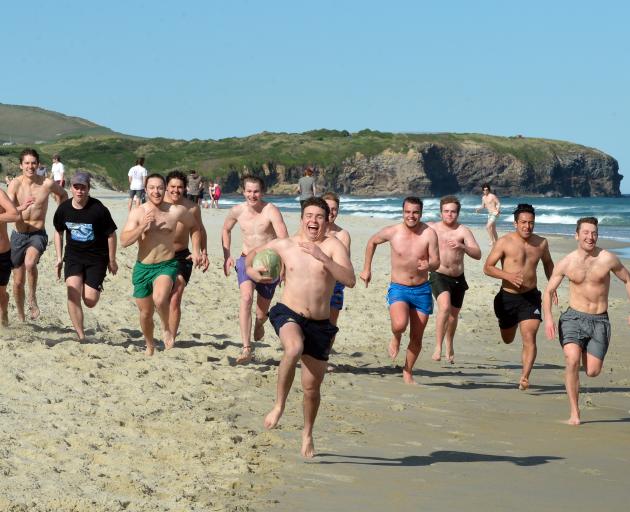 Students enjoy the sun at St Kilda Beach. Photo: ODT
Despite the latest cold blast most of New Zealand is in for an early summer with temperatures expected to exceed 30°C in some parts of the country this month.

Niwa has released its three month outlook and it's expected to be warm and dry for most parts of the country.

However, coastal areas of Otago are likely to experience below normal rainfall totals, soil moisture levels and river flows.

Niwa meteorologist Ben Noll said above average or near average temperatures are expected over the next three months and this month will start off quite warm, with some warm summer-like spells.

There were dryer than normal weather patterns across the country in September and October and that is expected to continue with normal to below normal rainfall expected for the whole of the North Island and the top and east coast of the South Island for the next three months.

The West Coast of the South Island is tipped to have quite a bit of rainfall in the coming weeks, but for the season as a whole it could also go through some long dry periods, Mr Noll said.

Higher than normal temperatures and a lack of rainfall would dry out the soil which would hit farmers and it could create a fire risk, he warned.

New Zealand is on the cusp of an El Niño weather pattern and there is an 88 percent chance of New Zealand getting an El Niño over the next three months.

There were a lot of strong westerly winds forecast for November, he said.